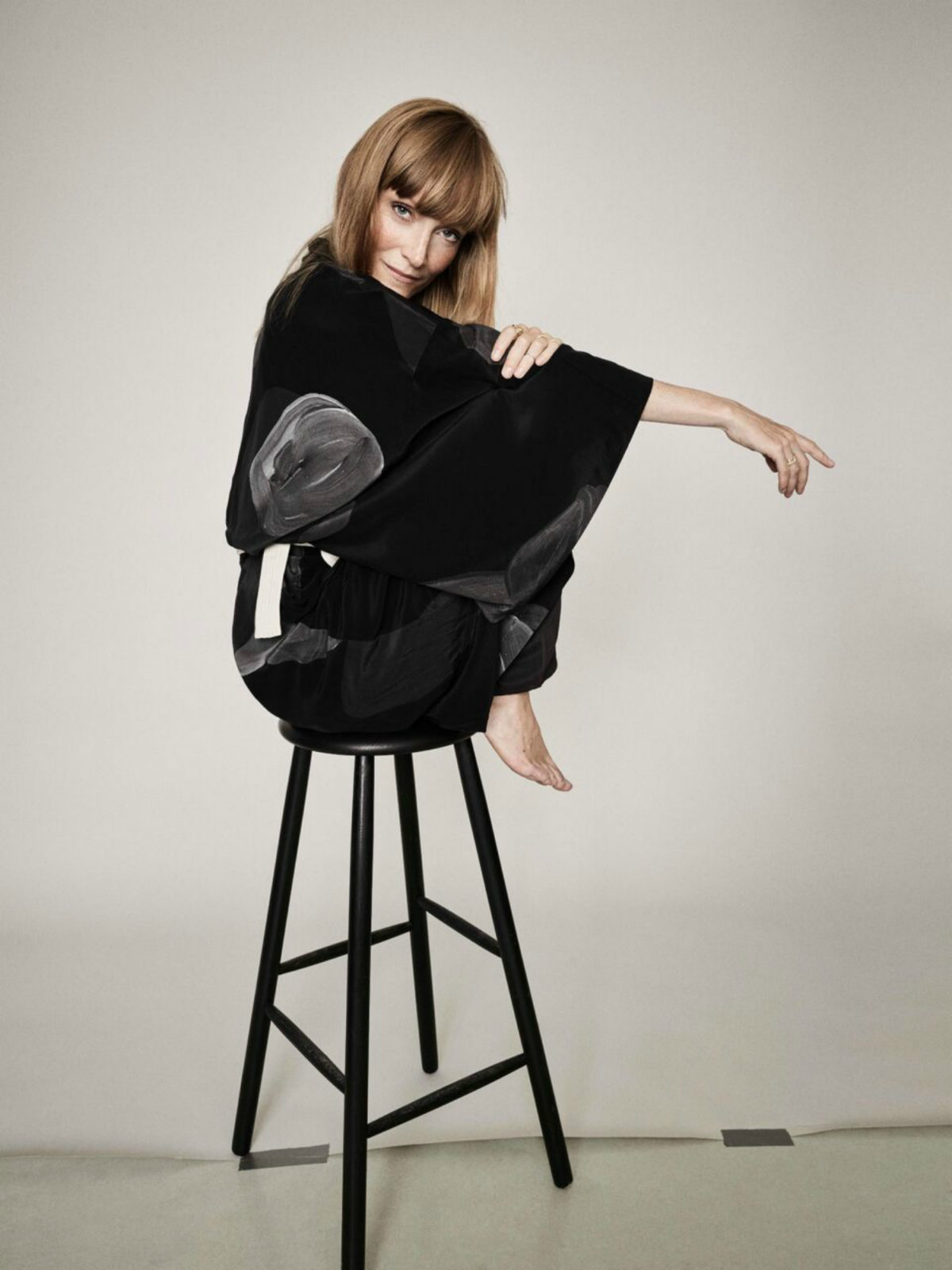 Stine Goya has undisputedly achieved her goal of leaving a mark on the Scandinavian fashion scene. Now, the Danish fashion designer is ready to conquer the world. The 38-year old graduated from one of the most prestigious fashion schools in the world, Central Saint Martins, back in 2005 and has worked her way through just about all of the industry’s facettes. After starting out as a model, later working as a stylist, and finally taking an editor job at one of Denmark’s most renowned fashion magazines, Stine felt the urge to take her contribution to the business to the next level. “I decided I wanted to start my own company, even though, at the time, I didn’t really know what it would take,” she explains.

What she did know, however, was that she “wanted to take a different approach. Many people think of Scandinavian style as very reduced, minimalistic, practical and pure. I wanted to give it a more artsistic, a more colorful spin.” Without a doubt, Stine Goya succeeded at doing so, manifesting her brand and its identity in- and outside her native Denmark’s pool of creatives.

“The company’s been experiencing an organic and steady growth. Especially in the last, say 3 years, we have grown more rapidly and more than double our size as people now really recognize and understand the brand’s identity. Therefore, we now have the strength and standing to dive even deeper into the international market.” This time around, the label is proud to have achieved its decade-long existence. So, in celebration of its 10-year anniversary, we had a chat with Stine Goya herself on surpassing Scandinavian stereotypes, evolving creatively, and the pressure of working in such a fast-paced work environment. 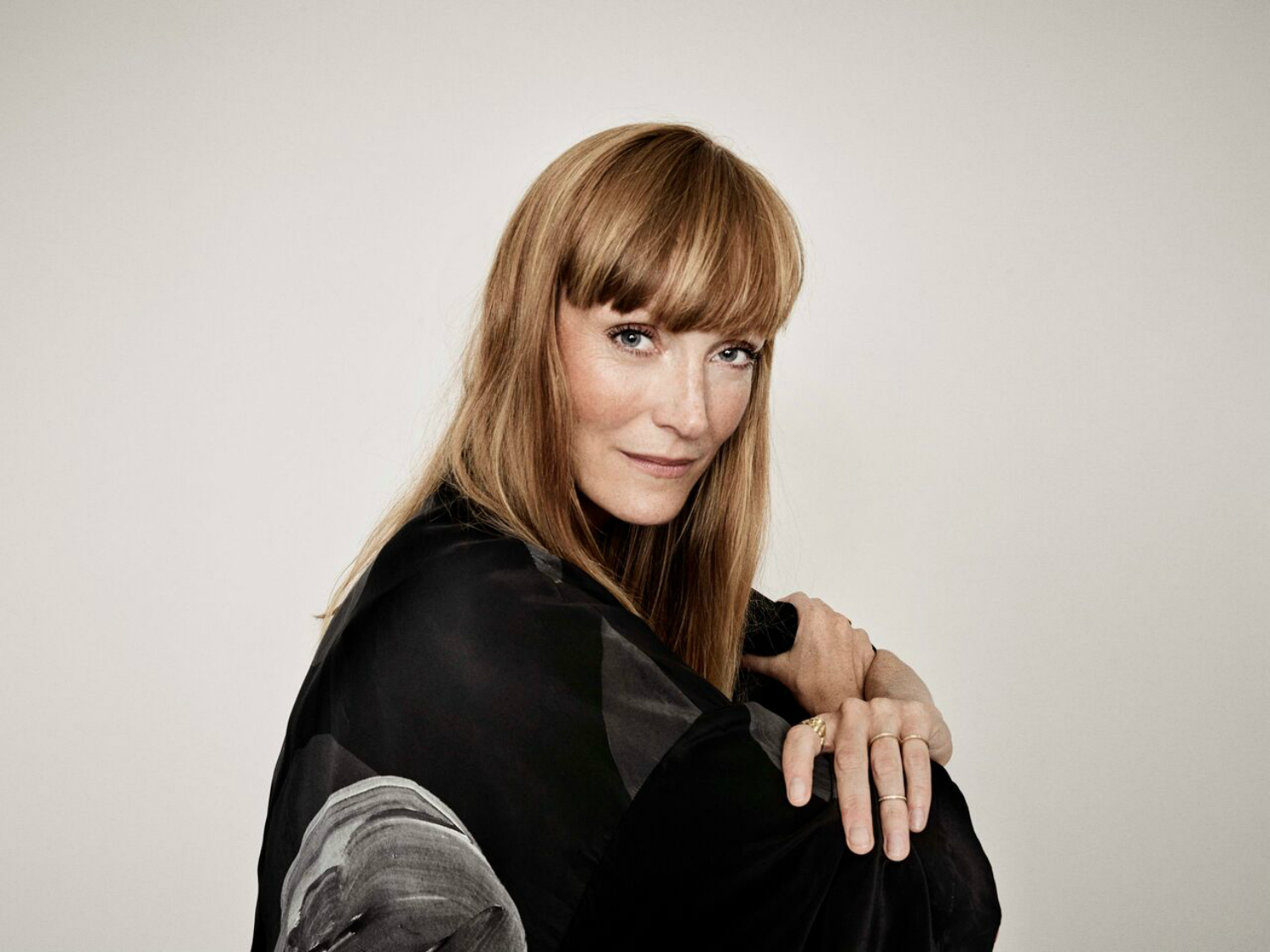 Who is the STINE GOYA woman? Who do you see wearing your clothes? What is she like?
We have a very diverse range of customers. Lots of younger women, girls even, that are very fashionable. But we also have a lot of middle aged women, who enjoy seeing others react to their choice of apparel. They like to wear pieces that draw attention to them. There is not a specific character in mind when we design. And I’d like to keep it that way. I enjoy the thought of our garments having a universal appeal, regardless of clients’ age or background.

There’s somewhat of a cliché surrounding Scandinavian design and aesthetics—Do you identify with that at all? Or would you say your vision is more of an umped-up version of that Scandinavian character?
I don’t really see myself as a typical Scandinavian designer. We want to encourage women to express their individuality through our clothing. We want this woman to stand out a bit. Whereas the average Scandinavian style is a bit shyer, a bit more conservative or held back, STINE GOYA is more playful than your run-of-the-mill Scandinavian label. 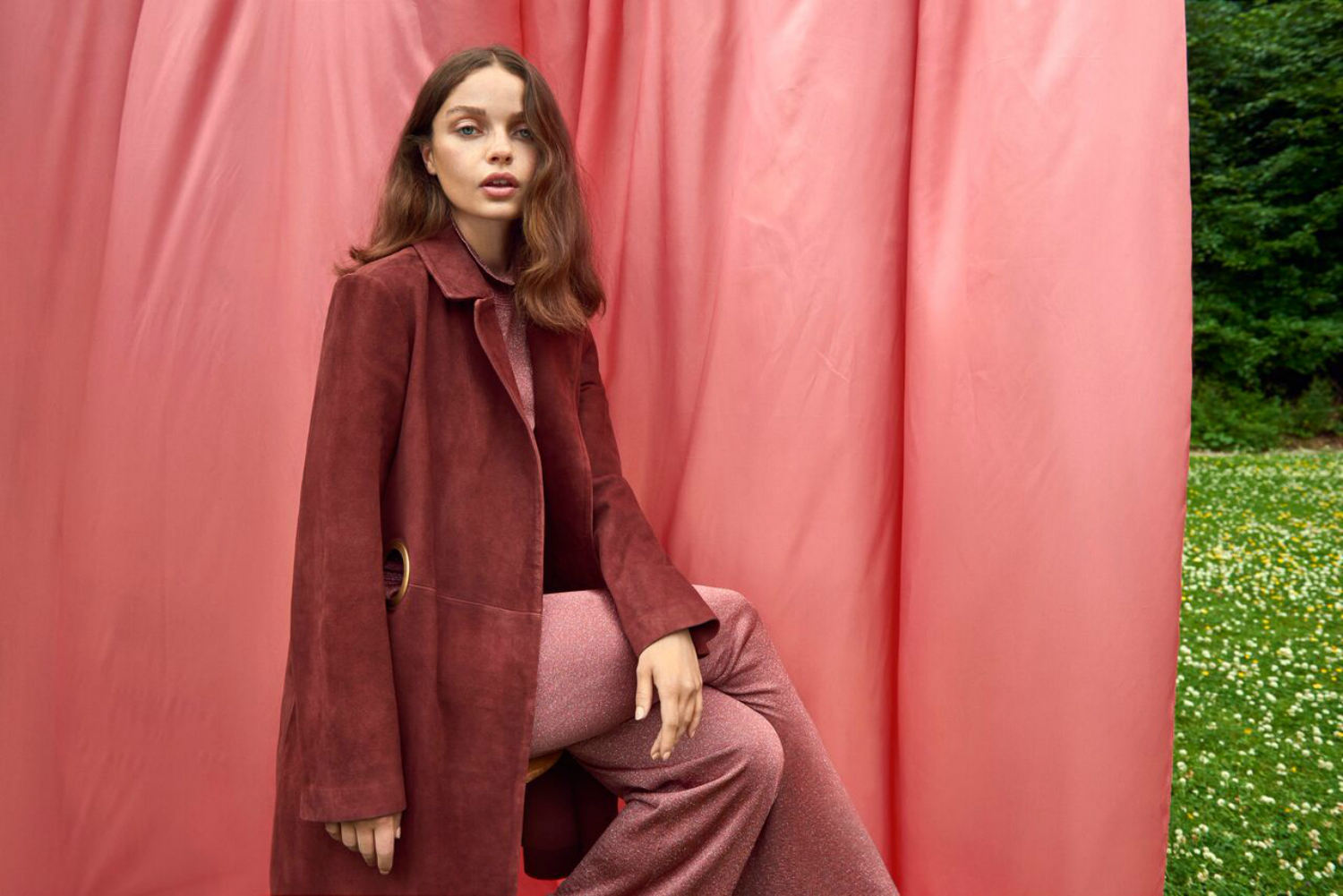 How have you evolved and how has the brand evolved over the course of a decade? Has the initial STINE GOYA woman aged 10 years, has she “grown up”?
I’m still inspired by art, culture, pictures, music and people I meet when I travel. That will not change, I guess. And fortunately, the brand has gone through a natural and conscious process of evolving. Much of this as a result of change in my way of working, becoming a bigger company and a more skilled designer. I feel I’ve matured and have become more structured when it comes to my job as a designer. The cohesion in our designs has become much more evident, recognizable or obvious, in a sense. We’ve really gotten better at what we do. It feels that, today, I am better and more confident at explaining why we do things the way we do them. My collections still have the same DNA as they did when I started 10 years ago, but I feel they have become more “relatable”, more understandable for our client. 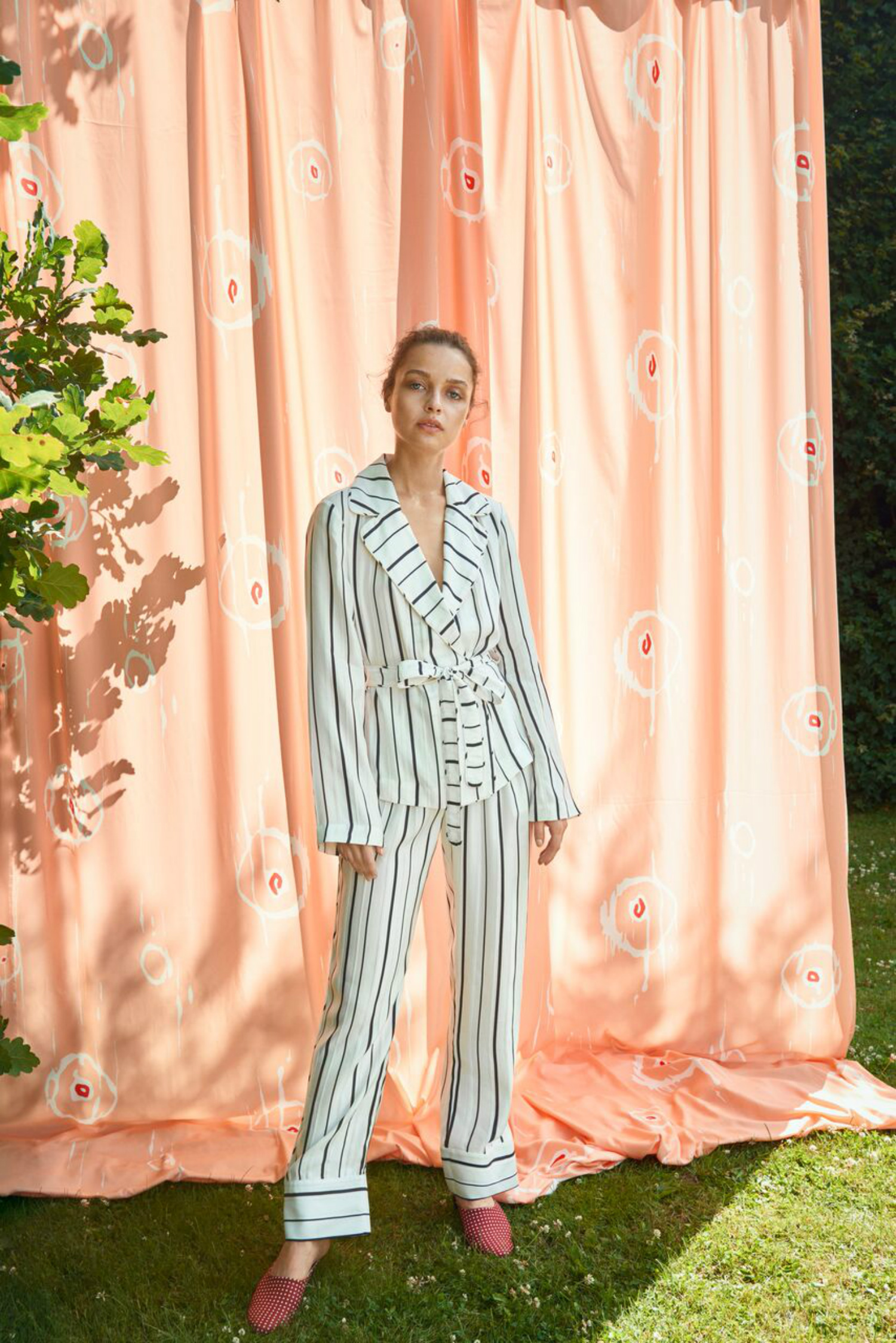 For your AW17 collection, you said you drew inspiration from the earth, the mind and the body—many designers tend to use very specific sources of inspiration, things that are very experimental, too. This, however, is very subtle.
Usually my ideas are very concrete for each collection. I see things when I travel, or read about something in a book and use this as a starting-point. This time, however, I thought a bit more abstractly. About the times that we live in. When you take a look into politics it seems all everyone is talking about is how different we are compared to each other, differentiating us into groups rather than recognizing, cherishing and celebrating what we have in common. And that’s what I wanted to explore. What are things all of us share? That’s how I started coming up with prints that resemble the fact that we all share a mind, a body and the planet we live on. Artists like to channel the times into their work. And so do I, but I choose not to get too political. I like to artistically express my stance on certain things without it being taken as political statement. 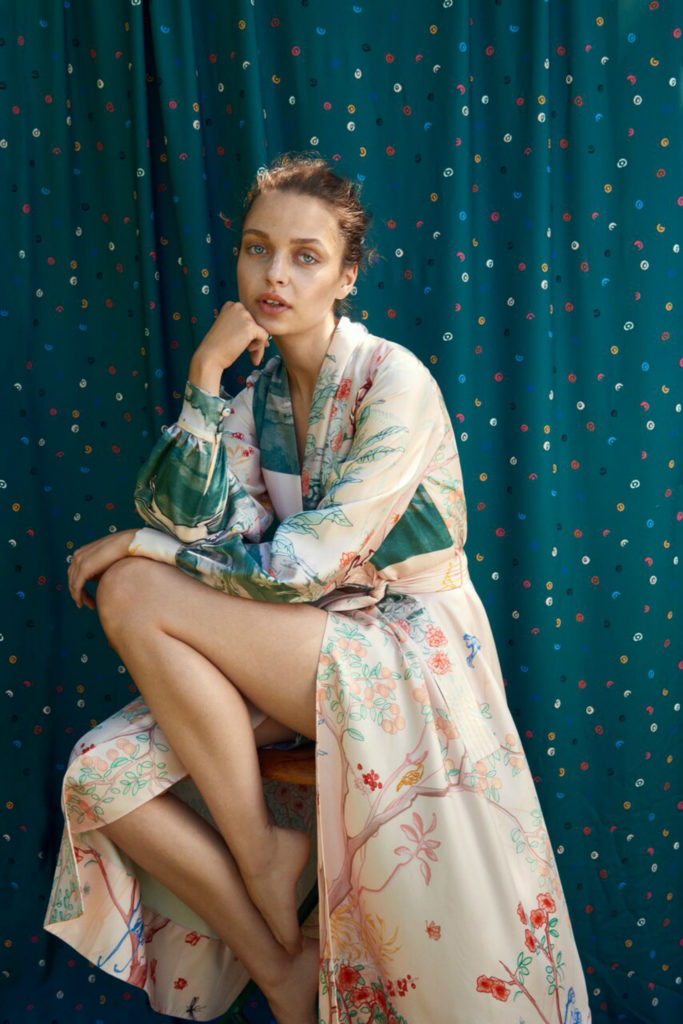 How does the rapid pace of the fashion industry influence or affect you and the brand?
Well, for starters, we don’t have the resources or capacities to hold up with huge houses such as Burberry. We don’t want to, though, either. We don’t like having to make any sudden or quick decisions.  We want to stay true to ourselves. We want to keep a 360-degree vision on who we are and what we want to put out. You have to stay true to yourself and believe in what it is you are doing. Compromising is obviously part of upkeeping a brand. But don’t let anything or anyone make you totally abandon your integrity as an artist. And, based on past experiences, I’ve learned that this can happen really easily if you surround yourself with the wrong crowd, with people who want you to go more commercial.

What has STINE GOYA accomplished in these past 10 years and what is yet to accomplish?
I feel that I have made a statement, in a way, proven that I’m here to stay. What I’d like in the future is to continue the company’s growth, a larger variety of products and more lines.  People are not in doubt when they see a piece by STINE GOYA, and I want to manifest the brand’s identity, reorganizability and authenticity even further.

What’s next? Any upcoming projects worth mentioning?
For the label’s 10-year anniversary we’re actually launching a book, to emphasize our identity through photography. We’re also preparing for a big fashion show this summer in Copenhagen, something we haven’t been doing for a few seasons. We also love collaborations, leaving our day-to-day work and looking into new areas. So, that is also something you can look Forward to. 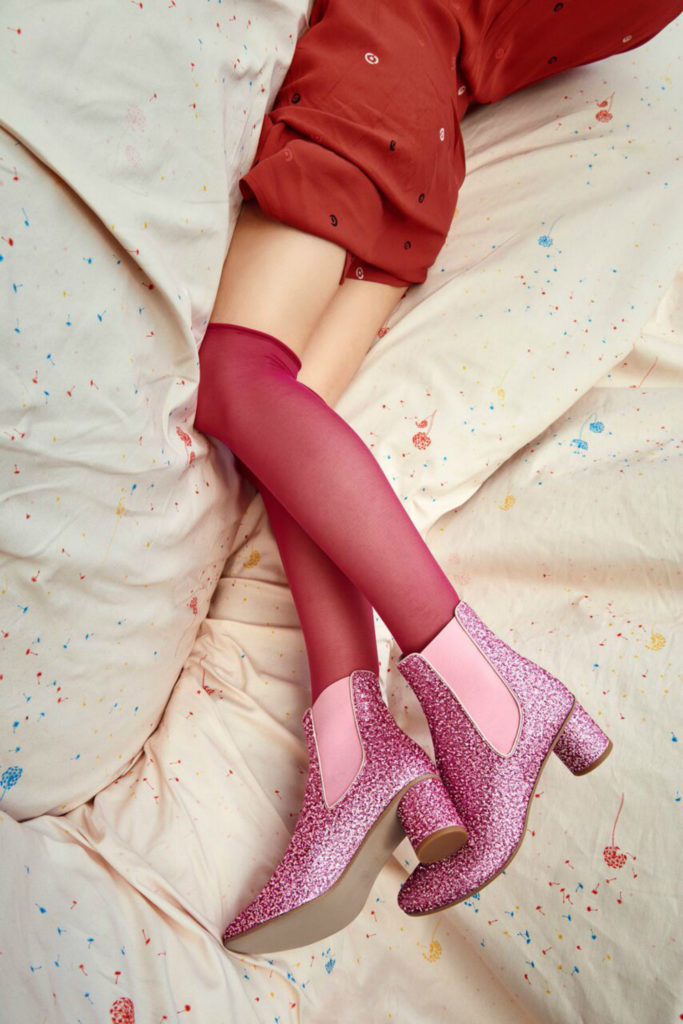 Will there be a 20th anniversary?
Of course! We’re looking forward to the future. We’ve been through so much, it’s been so hard at times, but also so much fun and so rewarding.