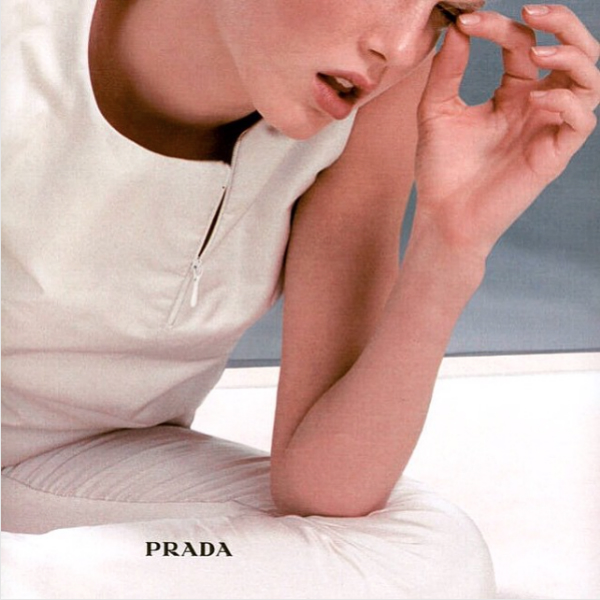 THE IMPACT OF THE UGLY: WHY 90S PRADA IS STILL SO RELEVANT

It might at first occur as a paradox that “ugly” is what some of fashion’s most progressive designs get described as on a regular basis. That what should actually be the epitome of good taste reveals itself to be something rather abstract than appealing. And still, dominating the fashion scene and its trends with her unusual designs for decades, Miuccia Prada has managed to turn exactly that paradox into a pioneering thought.

Being often credited as the inventor of the “ugly chic,” the Italian designer has nothing less than tirelessly put her distinct mark on fashion since the mid-90s – a period that saw her championing of mixing and matching commonly dismissed colors and materials suddenly skyrocket the brand to the top of the fashion pack. Although already introducing womenswear to her grandfathers leather goods house in 1989 it was not until Prada’s ideas came to stand in full contrast to the overtly sexy Tom-Ford-at-Gucci-esque aesthetic of the mid 90s that the manifestation of what is now widely seen as her signature began.

Showing a collection titled “Banal Eccentricity” for S/S 96, Prada had models like Amber Valetta and Kate Moss walk the runway in a variety of brown shades, mid length skirts, and clumpy sandals, making her collection not only stand out but also marking the beginning of her “ugly chic”-era, as it is often perceived today. In the years that followed, the 68-year old designer and co-CEO of Prada went nothing short of that headstart, continuously providing her designs with a sense of newness that didn’t root in invention, but in the unexplored. By juxtaposing ideas, colors, shapes, and fabrics in ways that each time around trigger some sort of eternal thrill, Prada with each season truly manages to search for the fresh.

“Ugly is attractive, ugly is exciting. Maybe because it is newer,” the designer herself once stated in an interview, continuing to explain that to her the idea of ugly holds much more potential than its counterpart of beauty, with the former not only being an accurate representation of humanity itself but also already a well established concept in art or cinema – just not in fashion. Nodding at these other displays of creativity makes another integral part of Prada’s approach become evident to her celebration of a counter aesthetic: The notion of her providing her collections with a second, intellectual layer, leading to the Prada wearer often being envisioned as someone looking for twists and turns, a challenge when it comes to clothing. Combined with her strive for the unconventional, it becomes clear it is a very conscious decision of hers to continuously confront us with a new set of possibilities – just not in a direct manner.

After getting a Ph.D in political science, Prada performed as a mime for five years – equally persuading the viewers with motion and emotion, rather than with what is plainly said. Later stating that she tends to start her design process from the perspective that her customers are going through a bad period in their lives, it gets all the more clear that Miuccia Prada is less than interested in what is easy. Rather, she wants us to engage with something we are not used to, leave our comfort zones, and question the meaning of “ugly” in the first place. Because more than often, what is dubbed ugly or undesirable simply refers to something we are not used to yet, a concept that doesn’t match with the common – and when you come to think of it this description reveals itself to be way more exciting than the mainstream.

With this approach, Miuccia Prada took a stand for disagreeing with what everybody else seems to agree on – paving the way for a range of designers following her lead to break rules of any aesthetic norms and forms in their own ways. With the rebirth of 90s era fashion still very much on the map, taking a look back at Prada’s counter concept provides a mindset equally as integral to fashion now, and thus still as prominent, showing how bendable perceptions of beautiful are.