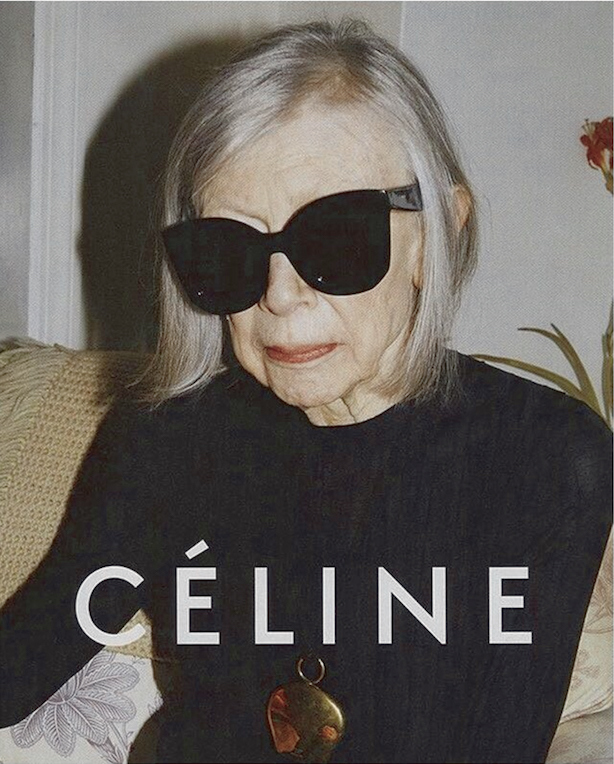 JOAN DIDION – A TEXT IS NOT ENOUGH

It is the beginning of 2015 when a woman with grey, sleek short hair, an elegant black dress and huge sunglasses became the face of the Céline campaign. A campaign which appears special not only with regards to the lady’s age but even more because of her mesmerising aura. The woman is Joan Didion, one of the most important American authors and icon of her time. Two years later the same woman has turned into a role model for a new generation. In 2017 everybody seems to know her name. She stars on the cover of the coffee-table book “Legendary Authors And Their Style” by Terry Newman, a year earlier in Germany a selection of essays was published in a book called “Sentimentale Reisen” and this October, Netflix finally released the documentary “The Center Will Not Hold,” which already is proposed to be one of the most breathtaking biopics of the year.

But who is this woman whose story seems to be as influential as it is dramatic? Born in 1934, Joan Didion was raised in Sacramento. She started writing by the age of five, receiving her first notebook from her mother. And at the age of 21 in her senior year at Berkley University, she wins first place in the Prix de Paris essay contest sponsored by Vogue, which is awarded with the job as a research assistant at the magazine. It’s the point when her career begins and the icon is born. The young woman moves to New York and quickly gains promotion as an editor of the fashion magazine. At Condé Nast, where she works for more than seven years, she also meets her future husband and lifetime soul mate Gregory Dunne, who back then works for TIME magazine.

Their relationship is the ideal match. A symbiosis of style and intellect that not only stimulates their writing – separately and together – but also creates an atmosphere that casts a spell even on the greatest. After moving to California in the early sixties big names like Warren Beatty, Steven Spielberg, Martin Scorsese, and Harrison Ford not only spend time at their house regularly, they sometimes even live with them for a while, gaining from the very special spirit that seems to affect everything around this couple.

After quitting her job at Vogue und moving to California, Joan Didion writes for a number of magazines and soon becomes one of the influencing writers of the 1960s and 1970s. Her texts introduce a new journalism, which uses literary techniques and narratives as much as it transports the author’s personal view. Later, in 1970, Hunter S. Thompson claims this the so called Gonzo journalism. Joan Didions first novel “River Run” is published in 1963. Many other books follow, among them the breathtaking portrait of the Hippie generation “Slouching Towards Bethlehem”, “Play It As it Lays”, which also has been adapted for the cinema, “The White Album”, a collection of pieces from her work for Life, Esquire, The New York Times, and other magazines, and “Democracy”, a caustic reflection of a private love relationship placed in the setting of the public political sphere.

Comparing these works, they all reflect what is so special about Joan Didion and her writing. This woman is an observer. One that won’t even miss the slightest details. One that always sees the personal with regards to topics of society and politics. And, most of all, one that is not afraid to confront herself with her inner fears and traumas to create something that is as breathtaking as it appears to be authentic. “I write entirely to find out what I’m thinking, what I’m looking at, what I see and what it means. What I want and what I fear,” she states in her essay “Why I write” in 1976. Reading Joan Didion always means to see the world with her eyes. She even describes it as an aggressive, hostile “act of saying I, of imposing oneself upon other people, of saying listen to me, see it my way, change your mind”.

But it is much more than that. Didion’s writing is as sharp as it is unerring. Like an alchemist she puts together the smallest impressions touching her mind and her soul in order to form images, which will get the reader totally drawn into. Her texts embed the individual experience into great history and demonstrate that one is always affected by the other. It is passionate without being too sentimental, it deals with moral without judging and describes the complexity of disruption with rational clarity. For Joan Didion life is a grid which can never be transformed in simple messages of black and white. It states from alleged contradictions. Her portrayal of the Charles Manson family member Linda Kasabian, who was involved in the murder of Sharon Tate in 1969, therefore is a great example.

But this awareness of the drawback also has a therapeutic aspect. Nothing makes it clearer than her most important work, “The Year Of Magical Thinking”. It is 2003 when her daughter Quintana, called Q, gets ill. While Joan, Gregory, their family and friends are preparing for the worst, it is Gregory who passes away unexpectedly. With her daughter in the hospital, Joan Didion loses the love of her life, her other half and the author with whom she wrote so many important pieces. Others may break. Didion decides to write – maybe her most personal piece – and to confront herself with the loss and the need to move on. Therefore, she is awarded with the National Book Award for Non-Fiction in 2005. In the same year her daughter “Q” dies after long illness. And again this woman’s strength almost leaves one speechless. With “Blue Nights” she continues the inner and struggling process of leaving the people you love behind – and as it seems, she succeeds.

So in the end, the comeback of Joan Didion is much more than the late honoring of a great author. It’s a story of survival, of strength and the power of the written word. Joan Didion is an extraordinary woman. She is pathos without kitsch and the allegory of success and suffering. Maybe the current interest in her person somehow also results from a deep wish to finally give women more relevance in society and culture. Maybe it is all about the striking mixture of style, aura, and intellect, which, today, appears as the generic formula of success more than it ever did before. But her personal story reads like her books and by diving deep into it we learn why chaos and the dark sometimes need to become our closest friend.

“The Center Will Not Hold,” directed by Griffin Dunne, and produced by Annabelle Dunne, available on Netflix from October, 27th.