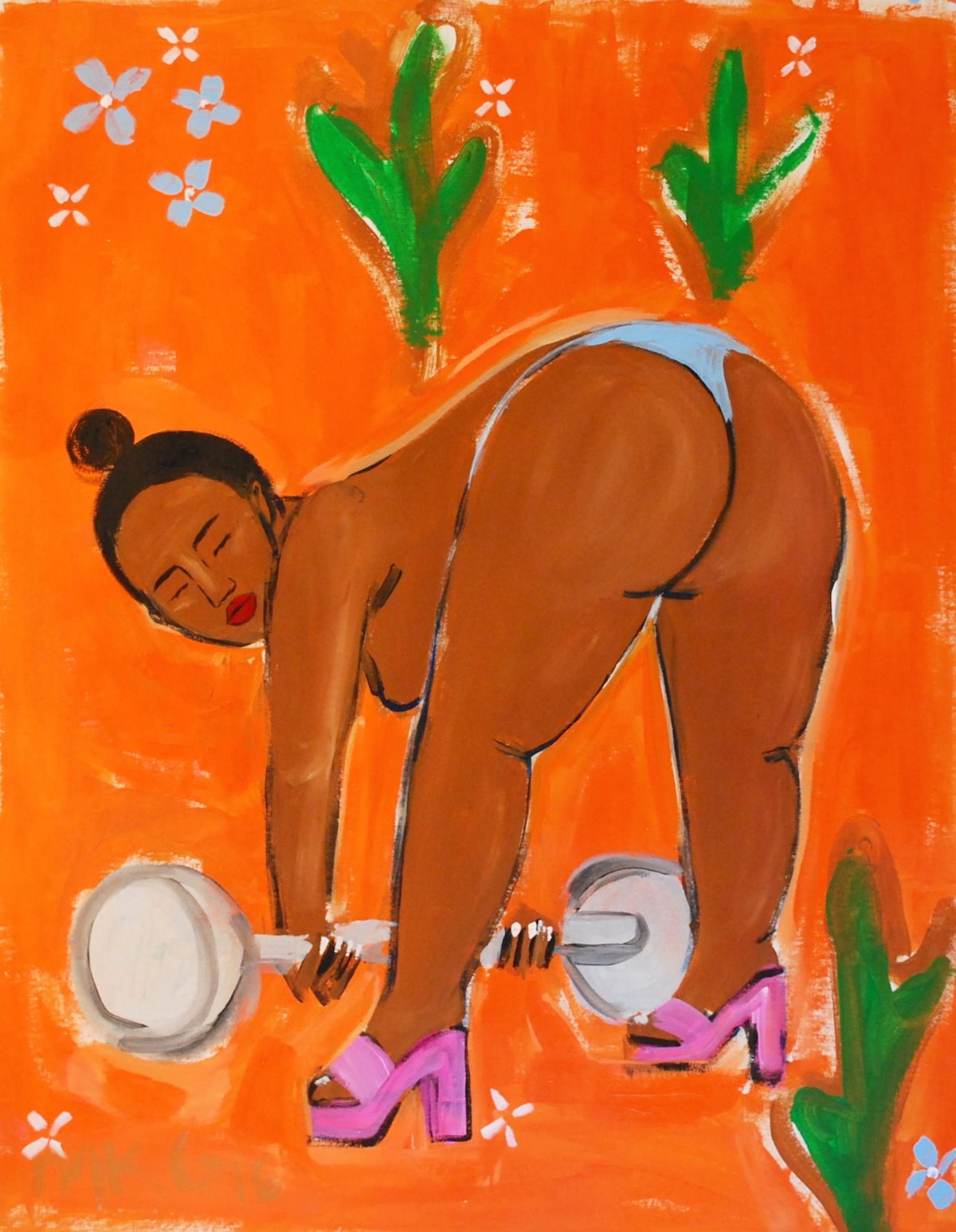 Words like exclusive or elitist have no place in the art of Monica Kim Garza, exchanged instead for unpretentious approachability and pop culture identity.

It would be easy to place the work of Monica Kim Garza within the frame of discussion about body positivity, intersectional feminism, and misogynistic Instagram politics. While these elements should by no means be ignored, the artist has no desire to be the poster-girl for social and political discussion – other than when it comes to Mother Earth. Nature is the basic element that threads through her ceramics and paintings; in the brightly-colored paintings she depicts nude women with tan-lines, Starbucks cups, or French Bulldogs, lying under Drake posters, on the beach, or working out next to Frida Kahlo self-portraits. The women pamper themselves, relax together with their friends, enjoy themselves. 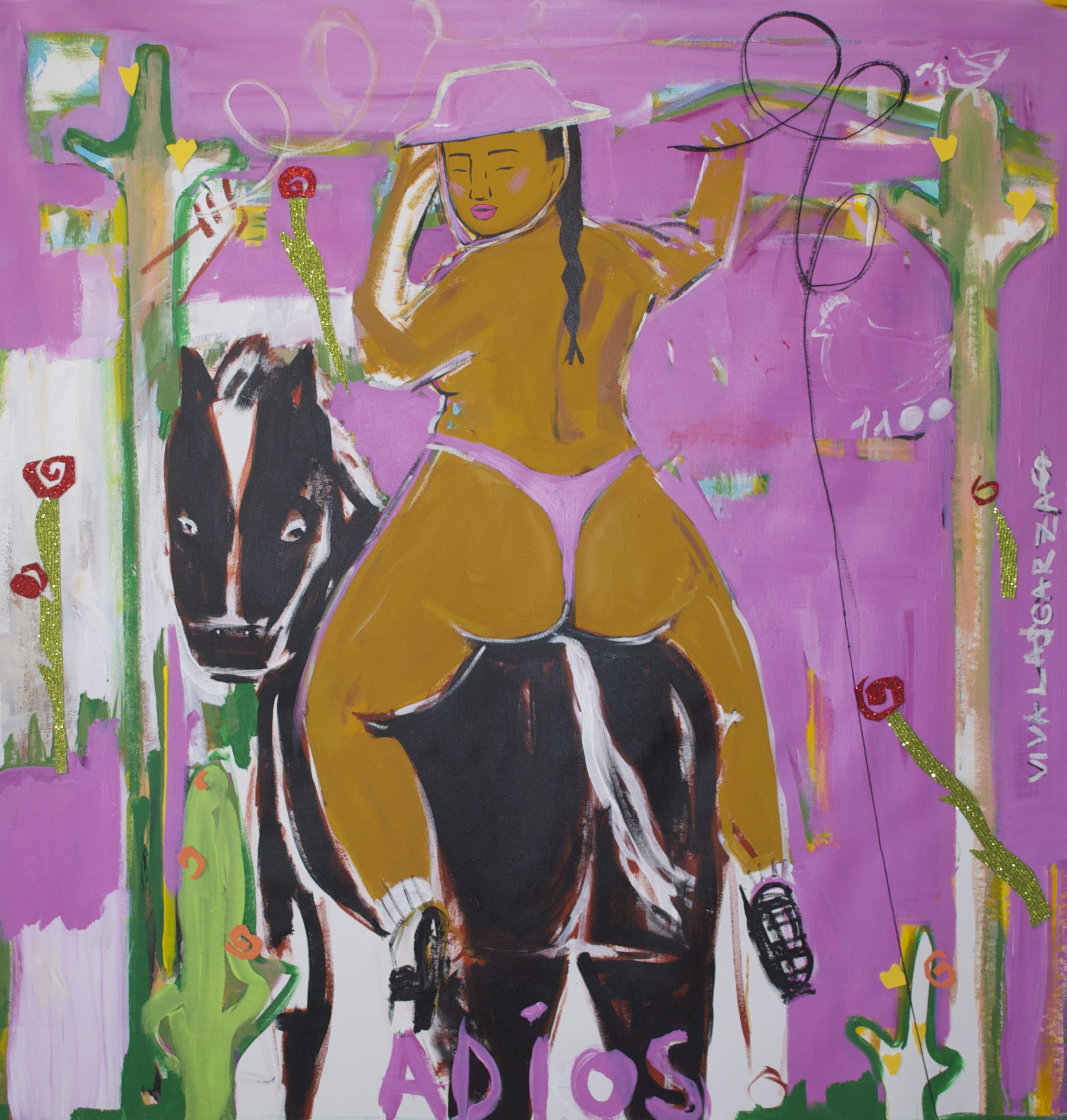 She creates works full to the brim with escapism, all the while showing an unfiltered yet sterile image of events taking place in private spheres. Monica Kim Garza’s paintings bring to life her own modified memories, of growing up with her Korean mother and Mexican father, of her travels and Southern manner in her home city of Atlanta, and of her self-doubt and self-love in equal measure. Her work is an artistic confrontation of the duality of her existence, the manifestation of her identity all-encompassing for the viewer.

What’s going on in your life?

I use my daily schedule a lot for my artwork: I wake up rather late and I love the plant-based, organic type of eating everything that comes from earth, I am very pro-earth. And I work out everyday because it makes me feel good – I used to have anxiety and when I exercise it brings an internal meditation. It brings a peace of mind. And then, I guess because I am tired from working out, I lay down. I stand a lot when I paint, almost the whole day, so it’s important for me to lay down. And I have to take care of myself. I have a very sensitive body, so I always put coconut oil on my skin. I love natural solutions and homeopathic remedies. It takes time to take care of yourself, but I do it every morning, I do a honey mask, I make my own tea with ginger. 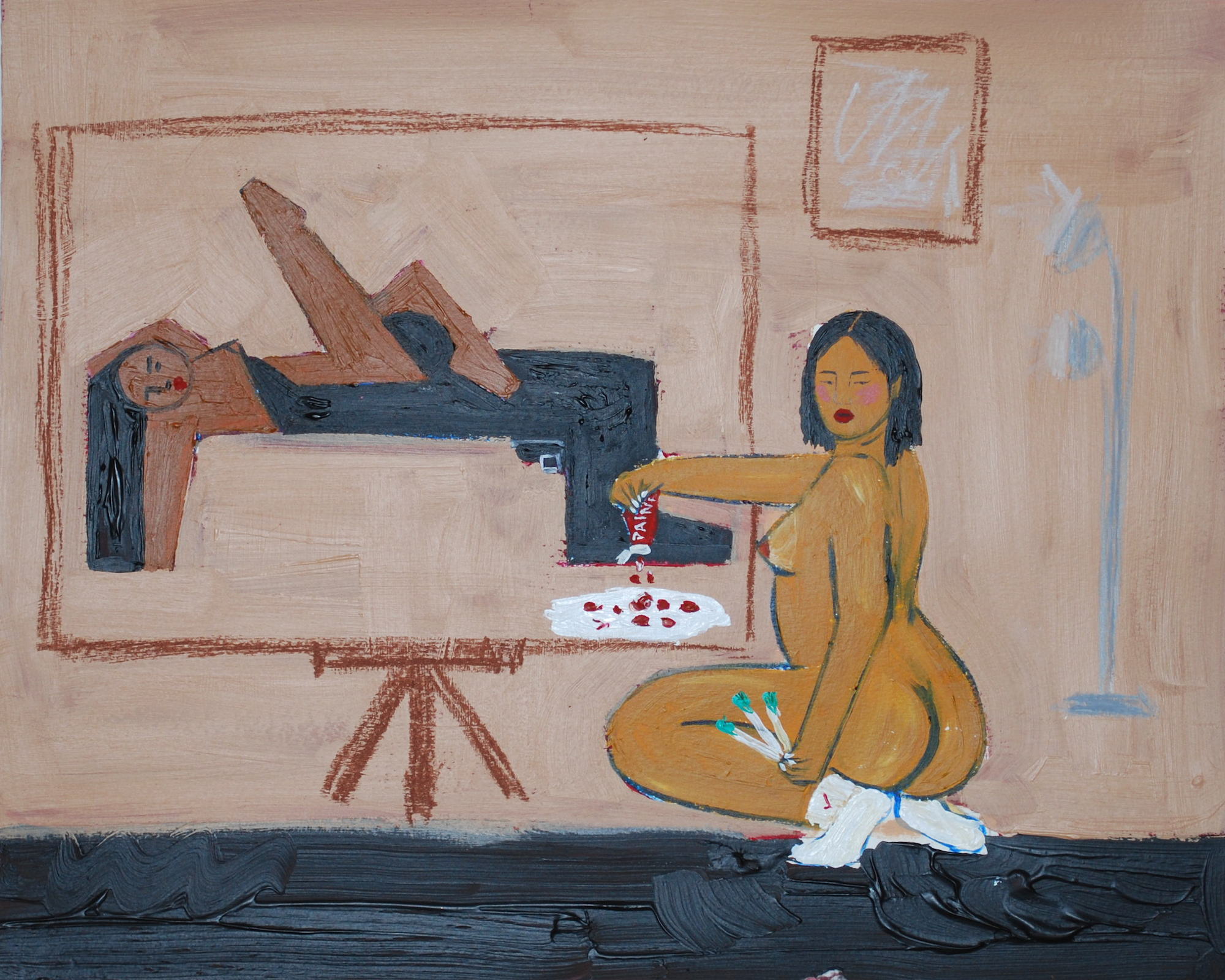 You’re also naked a lot? Or where does that come from? Stereotypically it isn’t a thing you would connect with the Southern bible-belt.

Here in Atlanta, strip clubs are very popular, they’re a big part of the culture. I think these strip clubs are some of the best! It’s funny and ironic how at the same time there is Christianity, but then there are these strip clubs. For me, the nudity thing came up naturally when I was teaching myself about art and I loved all the Renaissance works where they’re all nude. I just never imagined clothes. I thought about the beautiful shape of the bodies. It’s weird how some people are uncomfortable with it – even in the Vatican they’re naked on the ceilings.

On your paintings there’s a lot of sexual intercourse, but you never see the man’s face.

When I was in college, I used to make sexual drawings like that and sometimes I would draw the face, but many times I wouldn’t. I really love geometry and it was more about the moment between the bodies. When you look at ancient Egyptian or Greek art, you can see how the different bodies make shapes. Often I didn’t draw the face and thought, okay, I just come back to the face another time, but there wasn’t anyone who was necessarily inspiring me…

What does that say about the women in your paintings?

It depends on each painting, but I guess just solo, independent, free. 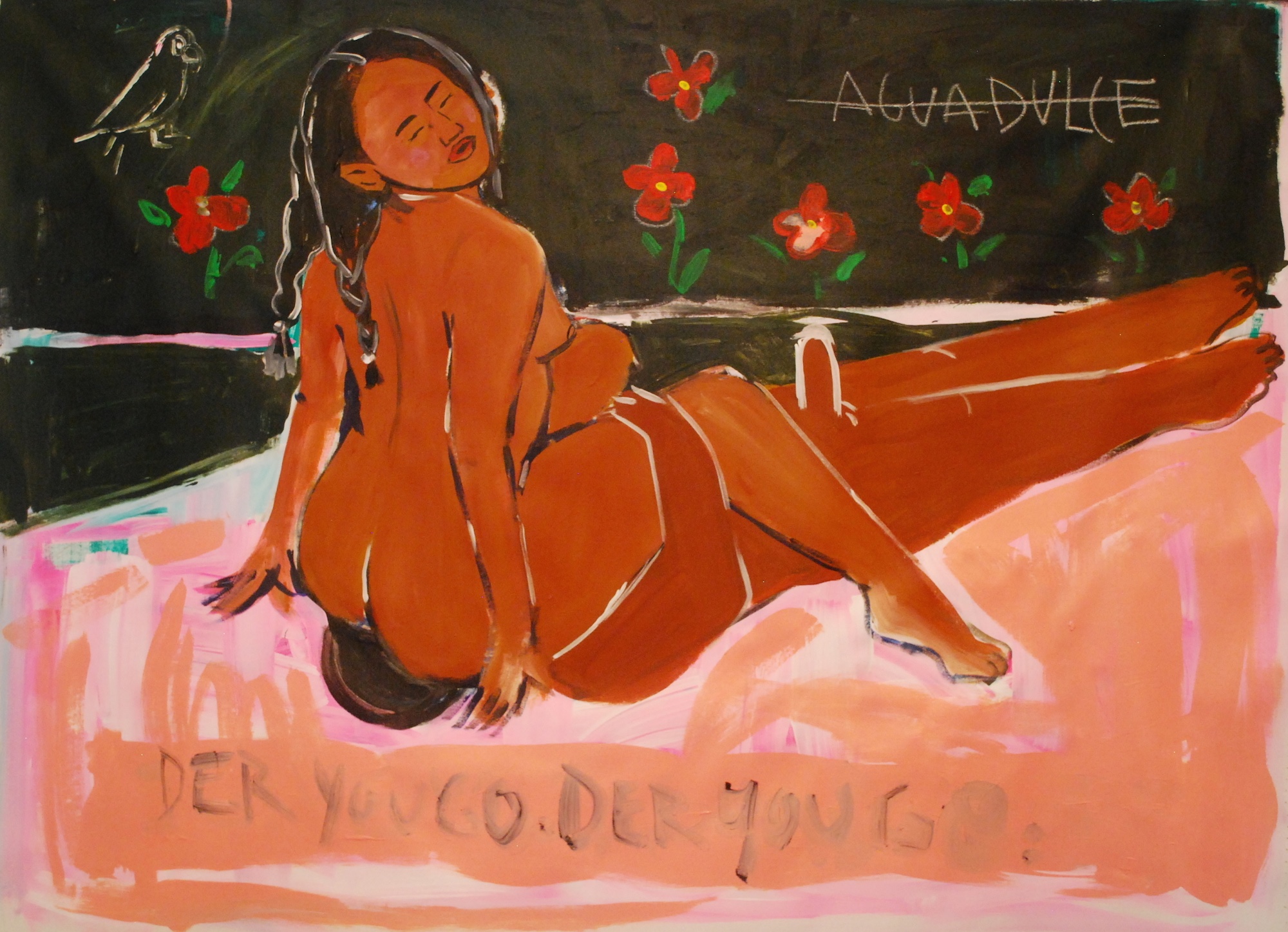 Would you say that about yourself, too?

I enjoy not being owned but being independent. A part of that goes into my paintings.

Hearing that and looking at your art it seems like you’ve created a perfect world for women, where they own their bodies, feel comfortable and self-paced. Key words for feminism and body-positivity.

I get that a lot. It’s not my intention at all, I don’t want to be a spokesperson for anything, maybe for Mother Earth. It’s personal memories and who I am. But I like when people see their body type in there, and to hear that my paintings make them feel good. I enjoy making happy paintings, but I think there should be room for sudden moments, fantasy and imagination. For me, when I work on a painting, I think less about the actual concept and more about color. I think about an evolution, a nostalgia. I guess, my whole life I always really liked the blue family: turquoise and baby blue in particular. It is funny that my Dad’s favorite colour is blue. I like the sky. Growing up, I always looked at the sky. But I also liked turquoise, like the water – when you go to the Caribbean or Florida, where I went a lot because Georgia is so close. That’s a thing that you do in your life: you want to evolve as a human being, but you have that nostalgia for the past.

The nostalgia can also be spotted in the women’s bedrooms?

It’s stuff that’s in my room at my parents’ house. But sometimes I just throw things in there that I like, or whatever I have in my mind that’s close to me. 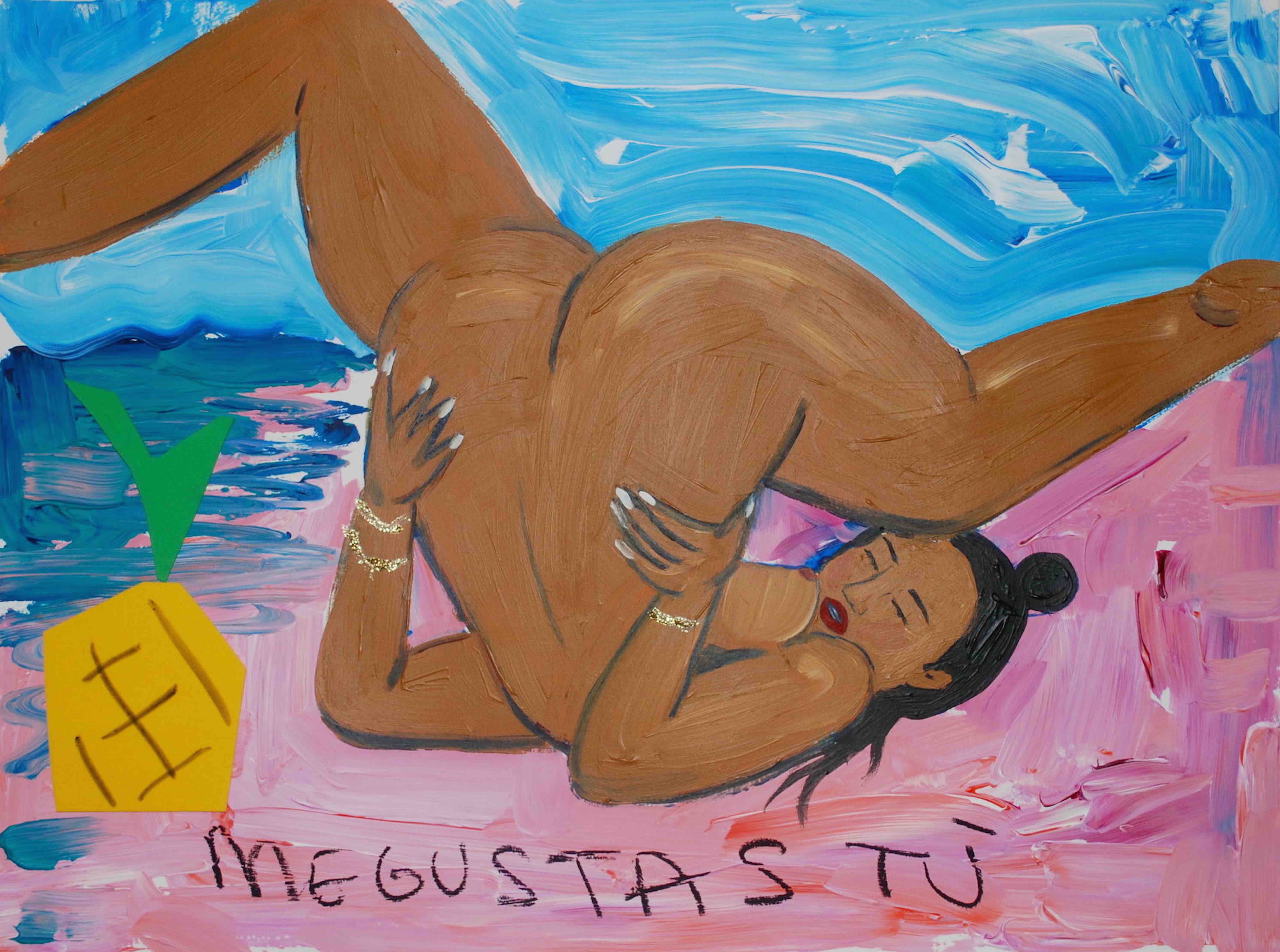 Even though there are religious symbols, you don’t believe in anything?

I’m spiritual. It’s hard to say that you are religious when you believe in everything. My dad is Catholic, my mum used to be Buddhist, but now she’s Atheist. I was raised with an open mind about God and I practice some Catholic beliefs, but for me, it’s more like a meditation or a crossroad thing. I believe even though we’re all coming from different homes, we are all on the same path. You should just be a good person.

You mentioned your parents – which role does heritage play in your life and in your art?

It is an intrinsic thing, for me it’s just inside. I don’t necessarily think about it, it’s just who I am. But sometimes I use my background, my own history, my culture as inspiration for my paintings. Right now I’m working on a new series about my Dad and where he’s from.

Recently a male friend compared your art to Gauguin’s what I didn’t really understand and appreciate. How do you feel about that?

I like Gauguin’s work, especially his colors, but to me, there is a male gaze. And also a colonial type of ownership. I think people draw that comparison only because of the skin tone. I see how people say that it is similar, but our viewpoints are very different. In a way, I feel like I am the person that Gauguin was painting. When I was in college a guy who came up to me – at that time, I was tanned, my hair was really black and long –and said “you look like the girl from Gauguin’s paintings. He painted tanned women with black hair.” He brought me a picture and I said, oh not really, but okay… Gauguin was looking at women in this particular way – and then his history… 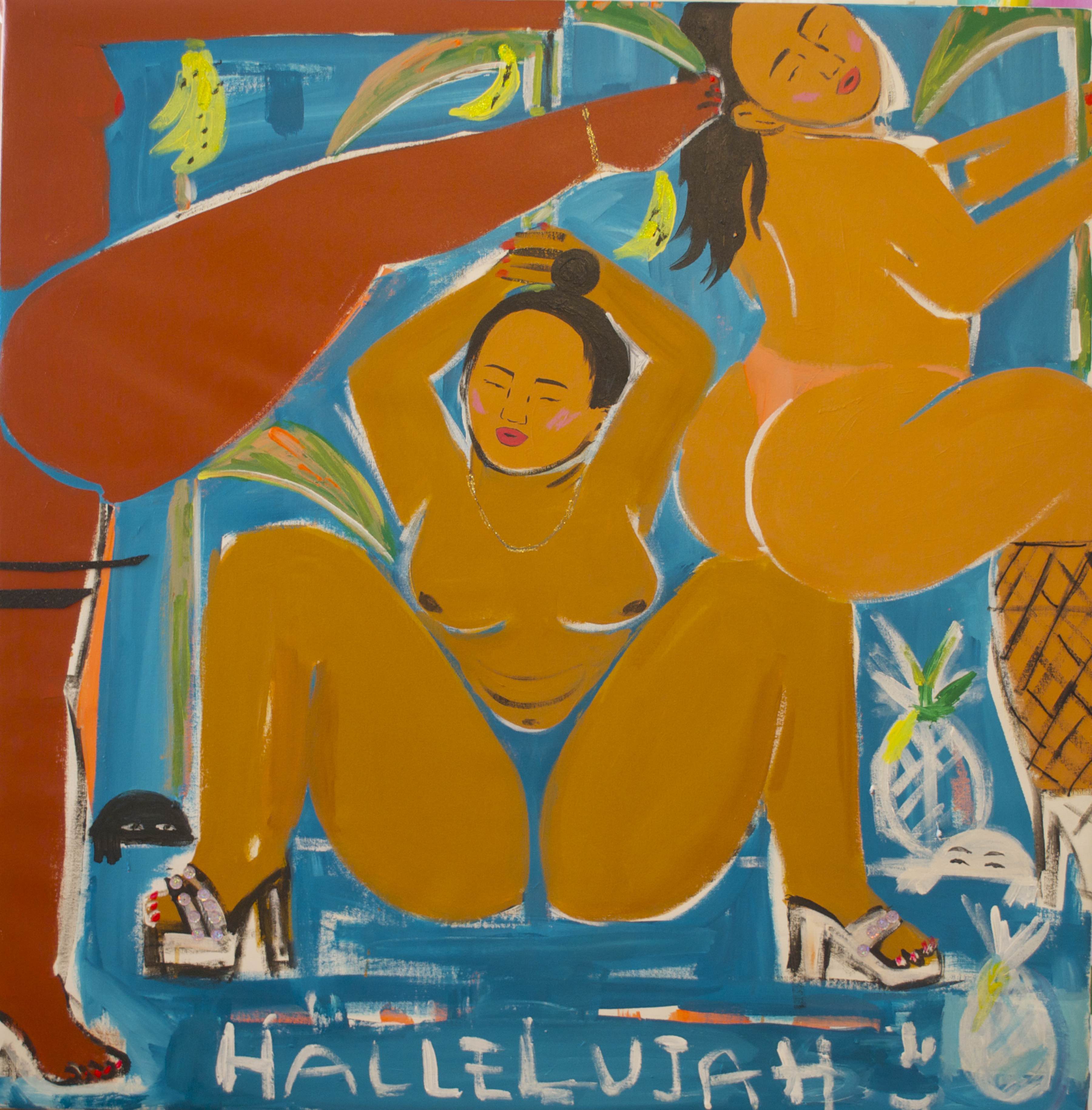 From a female gaze: what’s your favorite body part?

Is skin a body part?

That counts, even though it’s more of an organ.

I think my favorite thing about the body would be skin. And then the breasts of a woman. But looking at a natural breast, they are always so different.

Talking about skin – do you think that white people are able to understand your art like people of color?

I don’t know because I am not white, but I think that there is this human relationship as human beings. There could be a white man who sees my artwork and he loves it because it’s something that he is feeling. Maybe someone who is colored doesn’t feel the same way. There is a relationship that is beyond colour. We do have our colours, obviously, but I think it’s deeper. We all have a soul and a mind – and that feeling is the most important thing. There is race, but it shouldn’t be about race.

How would you define success?

Well, most people would define it monetarily. But I think it’s when you accomplished your goals that you have set out to do whether it be in life or your tasks. Some people can be successful in their wealth, but not in their personal lives. It’s hard to say what success is. I won’t know if I was successful until I die.

And what do you imagine after life?

I imagine myself a little cloud in the sky. Just my face, I don’t have a body. Maybe in space. I really don’t know what there is, but I imagine that my soul will go on. My mum says when I die, it’s just over. There won’t be God. So I’m open to that too. 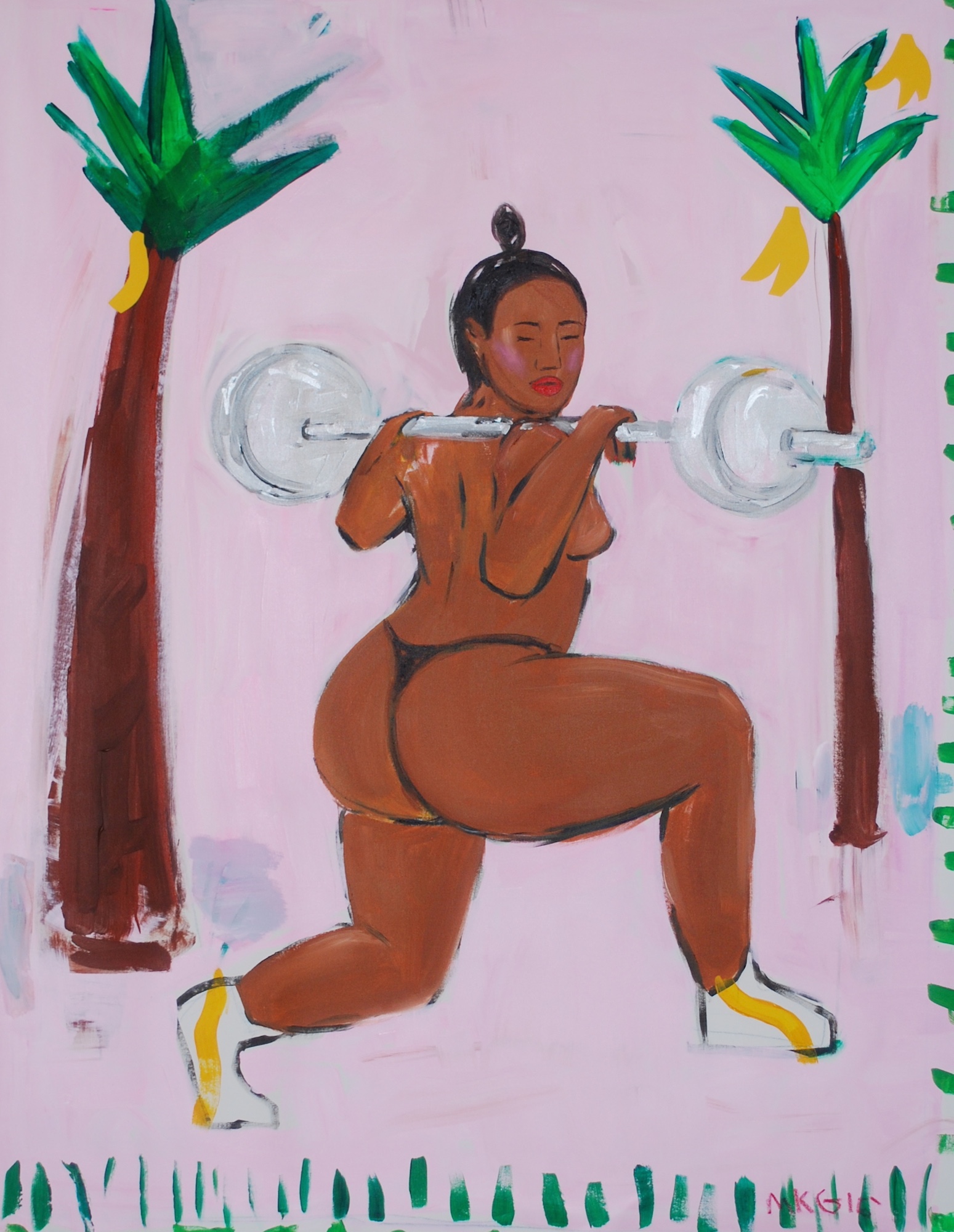