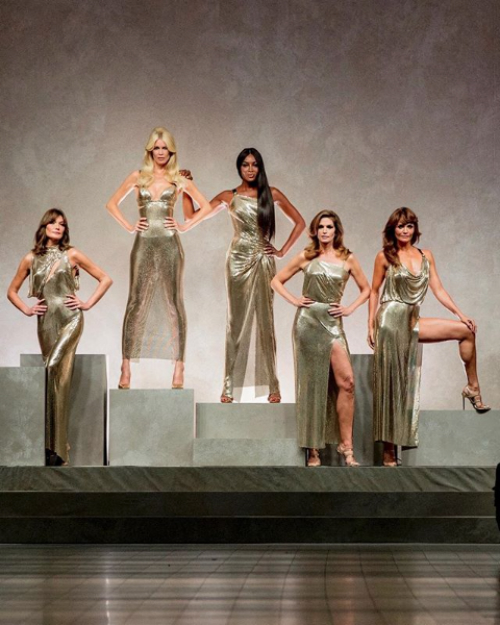 It’s no secret that fashion usually is all about creating an image – may it be an image as in a picture or an image as in a reputation. This season of Milan Fashion Week had it both: The pictures and the reputation. Reminding a lot of the fashion folk of just what fashion, in it’s best form, is about: Shared moments and emotions, transmitted through clothing and the stories around them. If you happen to have anything of an internet connection, there is one particular image you definitely couldn’t miss: Glimmering in gold, at the end of the SS18 Versace show, the return of the supermodels.

As an homage to her brother and founder of Versace, Gianni, who was shot dead 20 years ago in Miami Beach, Donatella called up some of the iconic women her brother has worked with during his heyday: Claudia Schiffer, Naomi Campbell, Cindy Crawford, Carla Bruni, and Helena Christensen. Dressed in floating gold dresses and posing at the end of the runway like an assembling of goddesses, the “return of the supermodels”, as it has since been dubbed, truly was a moment to remember – and be it just because it was so highly instagrammed and shared over social media.

Then there was Jil Sander, an icon that may not have returned, as the designer Jil Sander left her own house in October 2013, but that was gloriously revisited. As the new Creative Directors Lucie and Luke Meier staged their first catwalk show this season, the fashion house seems to have anxiously held it’s breath – after all, the very large footsteps of Raf Simons still felt like they needed to be filled. Luckily, as Lucie Meier has been working with Simons at Dior and Luke was the designer for Supreme for eight years, the husband-and-wife-duo made Sander feel light and minimalism very much current again. With a variety of floating coats, dresses, and blouses predominantly held in white or navy, they managed to give the Jil Sander signatures a distinct update.

Another undeniable icon, Miuccia Prada reassured Prada‘s standout status as one of the most integral shows of MFW with a collection put together in collaboration with nine female comic artists, their work covering both the show space and the clothes – and certainly also the topic of female empowerment which Prada particularly wanted to address. Of course not lacking of Prada’s signature “ugly chic”, the clothes were twisted and turned together, with the brand’s continuing nod to knee high socks and boxy silhouettes.

Overall, this season seemed to have a rather uplifting spirit about it – MSGM‘s Massimo Giorgetti dove deep into a vibrant colour palette for the brand’s SS18 offering, Bottega Veneta‘s Tomas Maier gave us everything embellished, Gucci‘s Alessandro Michele layered his more-is-more attitude with ancient sculptures around the runway and a bright turquoise catwalk. Often being deemed the most traditional and not as inventive city of the fashion month over recent seasons, Milan is ready to step up its game – and it has lined-up quite a few heavy hitting fashion names supporting this quest.