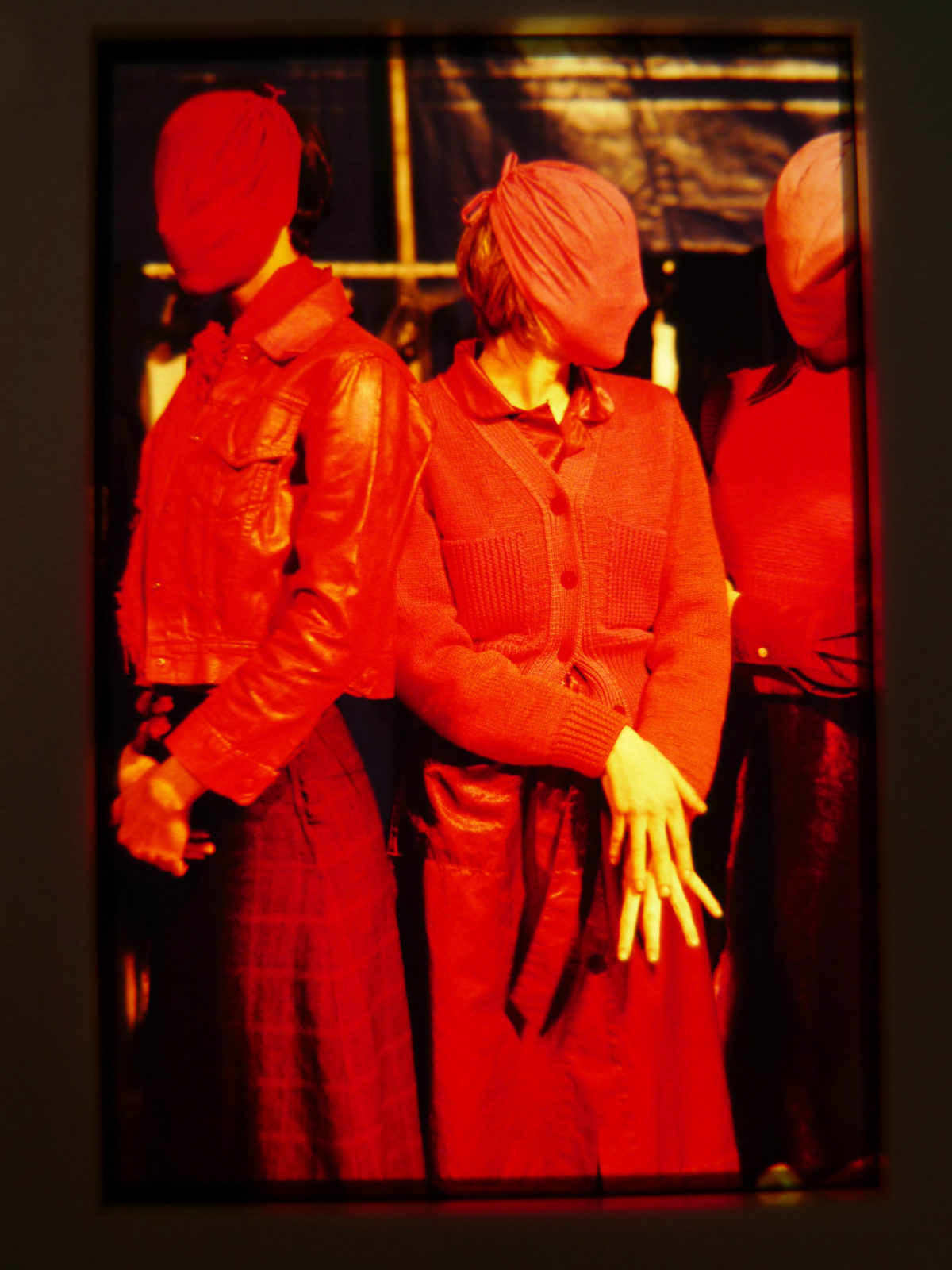 Driven by curiosity and creativity, Marina Faust is the only photographer to have worked with Martin Margiela for nearly his entire career. As the Maison turns 30 this year, she spoke to Material Magazine about a sense of connection to Margiela’s world that truly transcends the past.

Maison Martin Margiela had a thing for numbers. The fashion house’s lines–beginning at 0, the “Artisanal” offering, and going up to 23, not yet assigned to a collection—are categorised with a number first and a name second. The same is true for its labels, left blank or printed only with this numeral series and a circle indicating which line the garment belongs to. Martin Margiela himself, who founded the Maison in 1988 with his business partner Jenny Meirens and left around 20 years later, famously didn’t believe in singularity—rather, the designer placed emphasis on the combined visions of his employees. All interviews were answered using “we” instead of “I”; all portraits showed the team lined up as if for a school photo, with a seat often left empty for the brand’s absent founder.

Most strikingly, however, this exploration revealed itself not just in counting but in a colour. Favouring white for his atelier, the interior of the brand’s shops and the clothing itself, Margiela consciously highlighted the appeal of aging, stating that “passing time leaves traces on white surfaces.” So, 30 years after first finding expression in his clothing, has Margiela’s vision now gathered dust—is it not as clear as it once was? Marina Faust would argue no. In a time where original ideas, rather than garments, feel like the greatest luxury in fashion, Martin Margiela’s designs still shine bright.

Having captured close to the first 20 years of the Maison in over 1,000 images, which now make up an extensive archive, the Austrian-born artist and photographer played an integral part in documenting the oeuvre of a fashion house that often feels like a parallel universe—one where no idea is too abstract and no design too abstruse. Her photos bear witness to the translucency of the brand and its designs, which you can touch, wear, or feel, but ultimately never grasp.

After their extensive collaboration, significantly shaped by a sense of blind trust and immediate bonding, Faust stopped working with the Maison shortly after Martin Margiela himself left ten years ago. By October 2014, John Galliano was appointed as the new creative director, following which “Martin” was dropped from the brand’s name in time for Galliano’s first collection in early 2015.

With Martin Margiela being a notoriously private person right from the beginning to the end of his time at the Maison—no official photo of the designer exists, nor any public interview—the ideas and images he constructed often were required to do the talking. As Marina Faust shares her archive and experiences documenting one of the most influential fashion houses of recent history with Material Magazine, it quickly becomes apparent that the saying “emptiness is a place for possibility” has rarely ever been more fitting.

A lot of boundary-pushing and influential designers, like Alexander McQueen, for example, were very much dismissed by the press and public when showing their early collections. How did the first years of Maison Martin Margiela feel to you? How did you perceive people’s reactions?
At the beginning of the 1990s standing in a line in Manhattan I was addressed by a young man: “Is this a Martin Margiela jacket?” “Yes, it is.” “Ohhhh, it is so beautiful!!” That blew me away! Martin Margiela ̓s shapes were so recognisable—he very quickly became the hero of deconstruction. But even though he was known worldwide he remained a confidential designer. The art world was on fire about Margiela because the concepts hadn’t been seen before, they were strong and inspiring. One wanted to collect Margiela and wear it because on the body the silhouettes were so graceful. I think people are not aware of how much struggle it is to not be going with the flow. I could feel that struggle around him but I guess his wish for doing what he had to do swept it away.

On the other hand, wearing Margiela attracted critics. It was irritating when people found the clothes weird or even made fun of them — the same people who wore Margiela ten years later. Sometimes things take a long time to sink in. I see that as a sign of quality. In art it certainly is, in fashion it can be too, even though it is contradictory. And time, in our days, or lack of time, is a hell of an issue.

When you first encountered the Maison, were you drawn to Margiela and his collections the same way the man on the street in New York, or say, the art world were?
When I saw his designs for the first time I was mostly overwhelmed and wanted to get every single piece! I had never seen something like that collection. It was visionary, strongly based on historical costume structures, radically contemporary and playful. You could wear a deconstructed sweater in two, three or four pieces… It certainly was an encounter unlike many in life, where you have a vague impression of knowing what you see without knowing it at all—alien and familiar. I got interested in Martin Margiela at the end of the 1980s, quite conformist times—even though less than today. I had heard about a fashion presentation on a no man’s land parking lot outside of Paris with wild music. I felt attracted to such a subversive underground act. Today it may be common, but at that time this kind of thing was revolutionary for a fashion show. Curious to see who was behind it, I just went to the showroom. At my visit there, the press person, who had probably noticed my enthusiasm, asked me to take photos at the next presentation. I did and two weeks later Martin Margiela was present to look at my images. That is when we met and that is how we began to work together. He liked my photographic approach. I loved to plunge into his world.

It’s quite telling that you describe the Maison as “his world”. In fashion, creating a cohesive and all-encompassing surrounding seems like something designers are always feverishly trying to achieve. But when you speak about Margiela’s “world” it feels very organic, very authentic.
I liked the feeling of being dragged out of the solitude in my studio into the kind of family atmosphere in the showroom or into the exciting backstage mood before the shows, circumstances of strange intimacy. And I loved the bad conditions, too much light or too little, too much space or not enough, maximum five minutes time at the end of hours of preparations to get all the final looks of the models ready before they walk out. These few breaks per year were extremely inspiring.

I reflected for a long time on what form to find for this precious archive and finally developed “The Archive Box”. I looked at my images with the distance of time, with a fresh new look, and re-photographed into my analogue and digital photo material. Each “Archive Box” has a unique choice of ten images of my collaboration with Martin Margiela from 1990 until 2008. I still discover new images in my archive almost every day. It is quite a singular object about the extraordinary cosmology of Martin Margiela.

You previously mentioned that Margiela liked your photographic approach. Did your background in reportage photography make you want to capture fashion and a fashion house in a different way?
I stayed where I was as a photographer, I never was a fashion photographer. I was interested in the action that happened around me with the ambition to show the clothes, and took great pleasure in portraying all these interesting women who were, mostly for the first years, not professional models, wearing the most outstanding outfits.

Each photo shoot was a new adventurous experience and the discovery of the next collection. Margiela challenged the line between fashion and art very much, which was greatly stimulating. The way he did what he did was totally new. I think my images reflect what I understood about his oeuvre.

Was that desire to challenge the ordinary a point of connection between you and Margiela?
I think life is interesting when you “challenge the ordinary”, as you say. That to me sounds like the fundament of every artist. It is certainly one point in which Martin and I are accomplices.

Was there a moment when your singular visions became one? It must be quite a formative experience to collaborate with someone for so long.
Our visions never became one. I think he has his and I have mine. Friendship, understanding or complicity does not mean symbiosis.

How did this friendship and understanding evolve with the rapid increase in demand for the brand of Margiela himself?
In the beginning working with Martin Margiela had a quite confidential side, including encounters with wonderful people who worked with him. It was a little like being on another planet. Of course with time you grow closer, you understand each other better and faster. Over the years things changed, Martin Margiela became Maison Martin Margiela, it became bigger and many more people were involved. The familiarity wasn ̓t there as much anymore.

As for us, we just kept our working relationship as it was. The working atmosphere and interiors Margiela had created, defined by his aesthetics and concepts, resisted all changes until he left and beyond.

Even today, there still seems to be an unlimited desire for creativity and ideas emanating from whatever Maison Martin Margiela designed—as if it was literally woven into the concepts.
Margiela resonates because he revolutionised the fashion world forever. He is an infinite source of inspiration for so many. I think his generosity and the variety of concepts reflect a position towards “the other”, women, men. He had a deeper ambition of what dressing can mean, how much of a statement it can be—challenging courage, enhancing individual personality to an extreme. Today, markets dominate the industry so strongly that the possibility of manoeuvre became extremely reduced. Statements don’t last, so it is more about attitude than about taking a risk. But I want to believe that everything is possible. In our time there is also an immense freedom we never had before—very contradictory. As for Margiela and myself, I think my passion for his work speaks for itself.

The way you experienced your collaboration with Margiela and the Maison seems quite intense. At the time, could you foresee the influence Margiela was going to have?
No but I felt something important was happening. You can never know how things inscribe themselves in history.

Marina Faust is an artist living and working in Paris and Vienna. Her most recent solo show “It’s Only You” took place at “Le Consortium”, Dijon, 2017-18. Her project “The Archive Box”, focusing on her collaboration with Martin Margiela, was shown at ArtCurial, Vienna in 2017, LAILA, Tokyo, Corso Como, Galleria Carla Sozzani, Milano, 2017-18 and Van Horn Gallery, Düsseldorf, 2018.