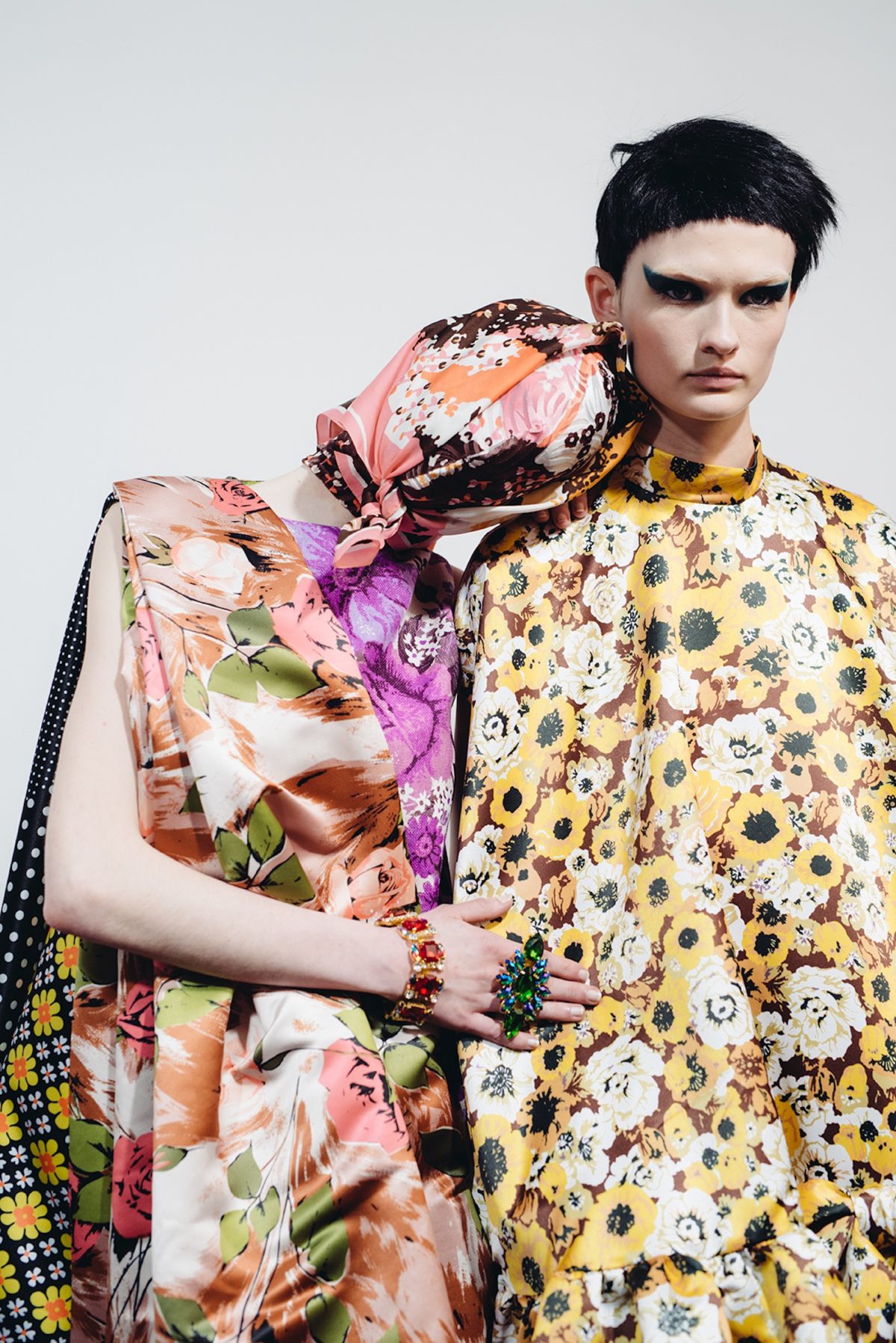 London Fashion Week featured highlights such as the Queen visiting her first fashion show, Chistopher Bailey’s monumental final collection for Burberry that was dedicated to Gay Pride or Christopher Kane‘s show that celebrated the joys of sex. While the week itself has been and gone, you can relive it through our backstage roundup of some of our favourite shows, presentations and happenings:

Having graduated from Central Saint Martens in 2014, Robertson quickly developed a following for her signature use of intricate embroidery and this season was no different. Mixed tartan dresses and tailored pieces arrived adorned and embellished with her signature iridescent floral motifs. The show also featured decorative headpieces, glittery textiles as well as asymmetrical sleeves.

Eudon Choi began his career as a menswear designer in Korea before transitioning to womenswear after an MA at the Royal College of Arts. This masculine element still pervades his design, as evidenced by his strong, everpresent tailoring aspect. But here, the tailoring takes on a feminine quality through his flowing, belted trenchcoats, soft fisherman’s knits and oversized scarves. The key pieces, however, are the colourful fishing hats (made in collaboration with milliner Noel Stuart) that pay homage to Choi’s holiday in St. Ives, Cornwall, a tiny coastal fishing village in England.

Williams often focuses on innovative textiles in her garments and this season she took inspiration from the A-line silhouettes and colours of the Sixties. Bright, metallic-tinged knits and dresses with geometric, houndstooth and gingham patterns were prevalent and contrasted with plainer, matt pieces. There was a subtle ode to Lurex in the three shiny metallic rings of Lurex that surrounded the socks and ankles of each model.

Coming from a family of illustrators, the Frankfurt-born designer counts Björk as one of her clients who has bought Knorr‘s outfits to wear both on and offstage. Knorr explores reductive notions of femininity and presents a more complex, alternative vision of “sexiness” that is far less reliant upon revealing flesh. You can sense this through her signature skin-tight drapery that pull and caresses the female body, creating a dynamic and bold silhouette. This season she incorporated more sheer and reflective fabrics in a palette of bold red, sky blue, silver and black.

When Teatum Jones cast Kelly Knox in their SS18 show, it was the first time a disabled model had ever walked in London Fashion Week. This epitomises the brand’s diverse approach to casting that translates to their inclusive collections: there’s something for everyone here. The show itself consisted of oversized coats, pleating, tailored suits and flowing dresses that emphasised a unique, mature view of femininity.

Quinn graduated from CSM less than two years ago but this season he can already count himself as the first person to ever have had the Queen, Her Royal Majesty, in attendance. She was there to hand out the inaugural Queen Elizabeth II Award for British Design that recognises the role fashion has to play in society and the economy. This isn’t his first accolade, however, as the young British designer also picked up the H&M Design award in 2017. He also gives back, having opened up his own textile print space in Peckham to share with students and fellow designers. Quinn’s aesthetic sensibility is characterised by bravado and a penchant for the loud, audacious mixing of prints. This season, polka dot collided with pleated florals as some models had faces 0bscured with headscarves and motorcycle helmets. Quinn’s silhouettes consisted of voluminous dresses, oversized down jackets as well as cinched and raised waistlines.