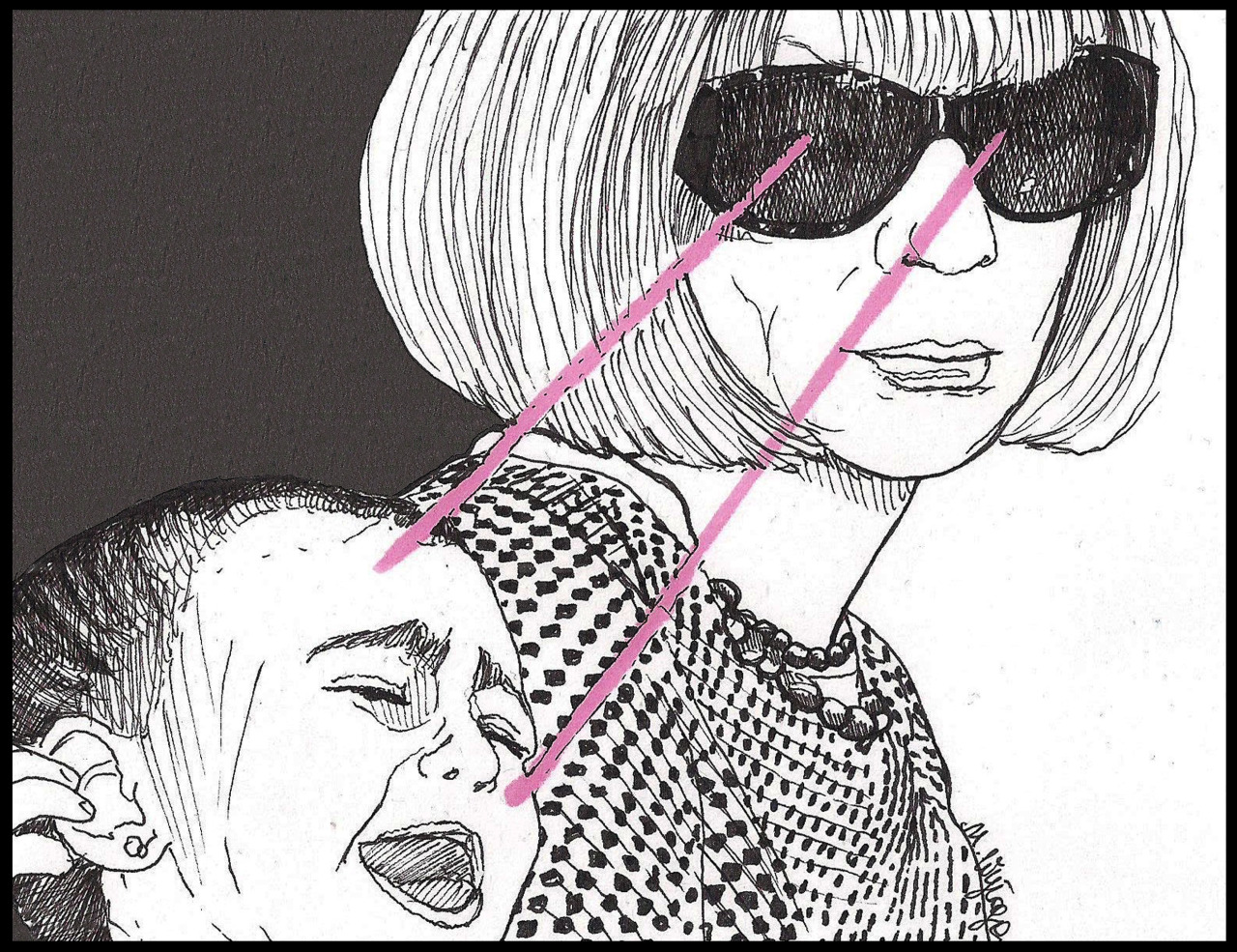 Why is irony necessary in art and fashion?

Irony goes hand in hand with humor and it creates a strong connection with the viewer so it’s inevitable in both creative fields. But it’s also important to have a balance between the irony and the visual side of your work. No matter if it’s a caricature or a new collection of clothes. I am so bored by the amount of t-shirts with all those “ironic” phrases and drawings that are really ugly and then there’s some “funny” sentence attached. I like fashion designers and artists that are playing with pop cultural motifs and aren’t afraid to use them in ironic ways. One of my favorite artists is Tove Jansson. I especially admire her early work, when she was a cartoonist for Garm, a Finnish satirical magazine. I also like the polish illustrator Ewa Mos. She often draws skulls or skeletons, but in a humorous way.

Did you just want to make people laugh or what drew you to caricatures?

I always loved a good gossip magazine, that’s my guilty pleasure. It’s funny how the smallest news about some celebrity excites people all over the world, as if Kim Kardashian was some kind of goddess. This whole imagination around show business just really inspired me. In the end my drawings should make you laugh but they should also provoke to think.

You often include short sentences in your work. Do you enjoy playing with the words or with the visuals more?

I treat words like an additional joke. The illustration should be funny without explanation. It makes no sense to add something more ridiculous when the actual event is funny in itself. Words can help to point something out but in the end I love the power of the visual joke.

What’s the most important thing when drawing a caricature?

You have to be fast! Making a satirical drawing must be an immediate reaction because scandals in the fashion world for example are only relevant for a short amount of time. I mainly draw in black and white because it allows me to react quickly to current news.

I’ve never been a troublemaker. I was a very calm and polite little girl that loved everything handcrafted. My mother showed me how to sew and knit, my father had a lot of building tools I quickly became interested in. So when something has to be fixed now I can handle it myself.

You grew up in Poland but currently live in Marrakesh, how do the art scenes in Europe and North Africa differ?

In Marrakesh we have a large international bohemian community. A lot of different cultures come together here, so there’s a big diversity. The Polish art scene on the other hand is much more homogeneous and elitist because art education is very developed in Poland, while most of the artists in Marrakech are autodidacts.

If you were an art critic, how would you describe your drawings?

I think there is a touch of surrealism in my work but I would actually describe my style as magic realism because the comical effect of my caricatures is not caused by the exaggeration of features and physiognomy.

Do you think fashion is still going to be important for your work in the future?

Yes, some of my plans are quite connected with fashion. I recently collaborated with Paulsoth, a young fashion label from Berlin that I designed five different scarf patterns for. Some of them are based on my acrylic paintings and others on my illustrations. Besides fashion I’m also preparing my first exhibition in Marrakech and I’m really excited!

Ultimately, should people in the fashion industry just try and be a bit more humorous?

No! They should stay just the way they are and let me do the rest.