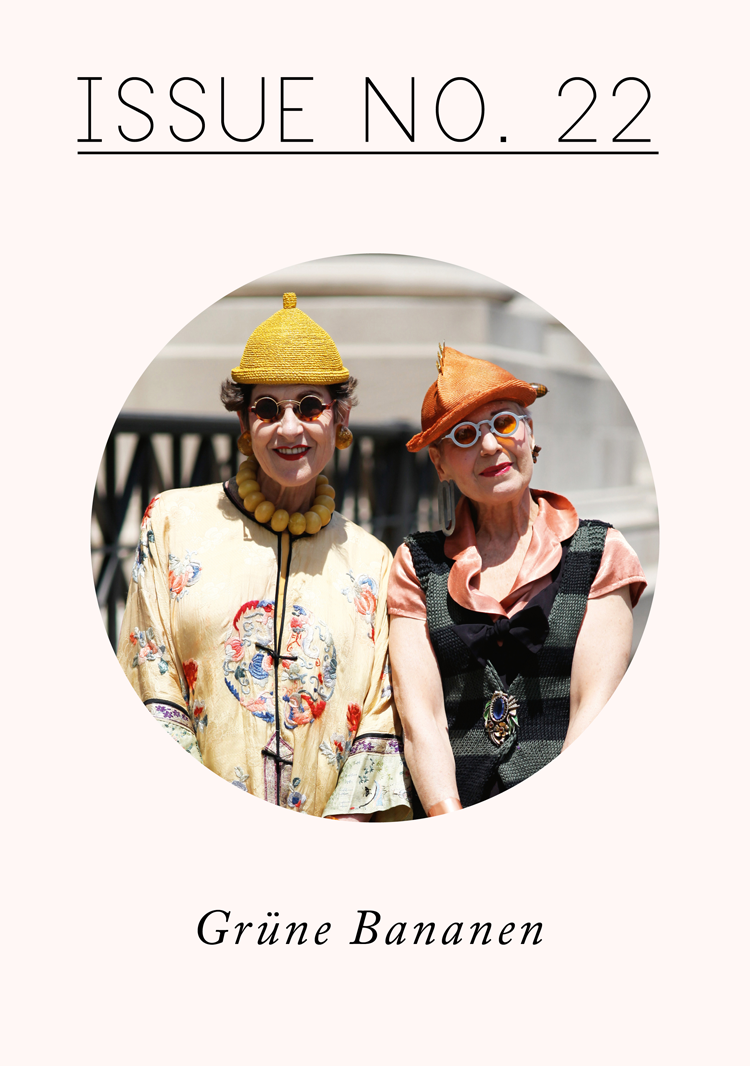 It‘s not just that older women are not really represented in style media. Fashion production does not seem to consider their needs either.
Ari: No, and a lot of these women obviously still shop, and they ask themselves, “Us women who aren’t like those models, where do we shop?” because they want to find things that are still interesting. And the fashion industry ignores that. There’s a few brands that tailor towards older people, but they assume that older people don’t want to still look great. But if you are creative, you can find clothes anywhere.

Adding film as a medium for the project seems so important in properly portraying these extraordinary women. Lina, how did you experience working on the project?
Lina: Meeting all these women was a very indivi-dual experience each time because some of them really opened up immediately, but I really had to work to make them forget that I am filming. It’s not so easy because they often really perform in front of the camera. There is a lot of awareness of the camera. It’s not like the younger generation who is so used to snapping pictures. Older people think about it more, and it comes across composed when you interview and film them. But we spent a lot of time with each of them, over a long timespan, so every time we would meet them again the conversations would be deeper, and they would let loose more until they allowed me to follow them around without paying any attention. If you get there the first time and just say “Please ignore me”, it’s not gonna happen. It’s been four years through the process, and it took time to be able and film those moments when they say or do something forgetting that the camera exists. I think those are the most precious ones. They’re beautiful experiences for me as a filmmaker.

Did you have difficulties deciding what is a private moment, an intimate conversation, and when to get out the camera?
Lina: Oh my God, so many times. When I finally pack everything up they’d be like “Oh and then this forgotten husband ….”, and I can’t believe I am not filming anymore.
Ari: I think with older women you also always feel this respect, and you’re afraid to show certain things. But at the same time we had to let go of that because we want to show the truth.

You probably ask these women so much more intimate questions than you would dare ask your own grandmother…
Ari: It’s not like that for me, but that’s also why I do this. My grandmother was like a very close friend to me, and I think that’s an interesting element of the project. I want to show that you don’t have to give up at a point in your life. The way that these women dress and the fact that they’re out there kind of makes them more approachable. We were having tea somewhere and a guy came up to one of the women we follow and asked “Why are you dressed like this?” and she’d say, “It’s my everyday look.” I thought it was so amazing. (laughs)

Is dressing flamboyantly a way of escaping or embracing age?
Lina: Both.
Ari: I think not all of them are that flamboyant, but I think dressing up is a way that they deal with age and with life. It makes them feel good. If they stopped doing it, they’d be giving up. I don’t know if it’s hiding their age. It’s a way of dealing with problems, with sadness…
Lina: And loneliness. There are many different reasons. From self-expression to getting attention, getting the feeling you’re still part of society.

Jean of The Idiosyncratic Fashionistas

Is there anyone out of your ladies who you feel especially close to?
Ari: Everyone loves Ilona. She is very outlandish in the way she looks. You see her on the street with her bright red hair, her eyelashes that she makes herself, very colourfully dressed, and you don’t know what she will be like. And when you talk to her, and she is so wise and intelligent and sharp; when she starts talking it’s kind of magical.
Lina: She has a philosophy of life that is kind of Zen-buddhist.
Ari: She did not like herself and know herself for a very long time, she felt ugly until she was eighty years old. When she was eighty she started doing cabaret performance shows.
Lina: Also people in her community come to her like a psychotherapist and she would help them deal with their problems. She very caring and wants to give something back to her community.

How did working on the project change your personal perspectives on life?
Ari: You have many different stages of your life and different people that you are. I learnt not to be so nervous about the future because every thing you go through is powerful. You just don’t know where you’re going to be when you’re old.

Lina: It took my fear of getting older. I keep battling it, I’m 29. The film is about those women accepting and expressing who they are and it made me question if I am accepting myself the way I am. They are very encouraging. I am looking forward to being 65, 75, 90!