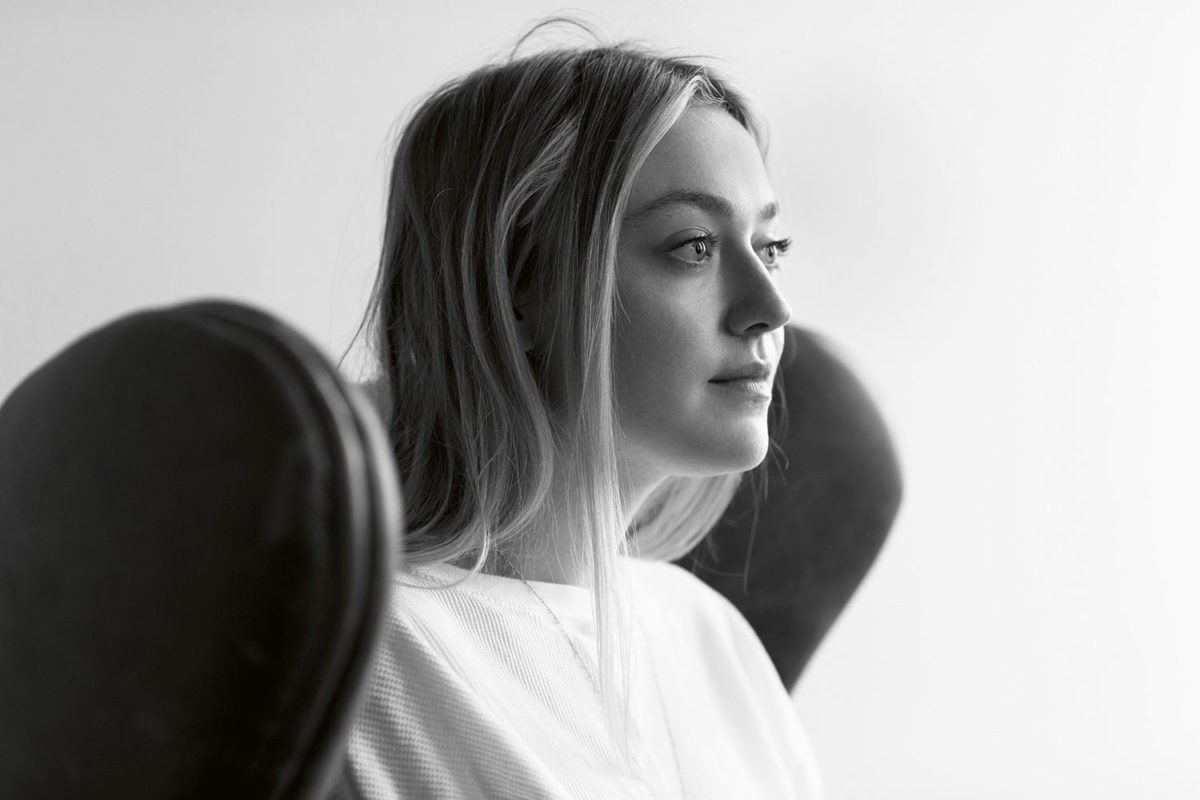 While certain progress and suitable transformation make for an entertaining and unpredictable life, there’s a fine line that’s easily crossed: suddenly, drifting into adaptive survival and becoming a stressful experience. But maybe, like press-ups or your times tables, it’s all just practice. Habit. The more often you do it, the further you exceed your limits and the easier it all becomes.

If that’s the case, then Dakota Fanning is an expert: change is an unwavering constant in her life. In her profession, she has to continually reinvent herself as a person without ever losing her personality. She travels a lot, yet is never uprooted. She grew up in the public eye, but didn’t do a “Lindsay Lohan”. Between film promo and the gym, Fanning calls Material. Despite her busy schedule, she sounds calm, professional and relaxed. With her 24th birthday just around the corner, she has been working in the film industry now for almost 20 years but has avoided appearing in the tabloids and remains unscathed by any scandals or flights of fancy: “I’ve gotten through all of this by ignoring it, in a way. Not thinking about it too much because there are certain situations that would just make you crazy.”

From an outsider’s perspective, someone who hasn’t grown up in the industry, this may seem remarkable. You could almost say it’s admirable. At the age of seven, Fanning became the youngest actress ever to receive the prestigious Screen Actors Guild Award for her role as Sean Penn’s daughter in I Am Sam. She had the strength and willpower to decide to trade in her home state of Georgia for the city of Los Angeles and the “regular” high school path for homeschooling. But the whole thing wasn’t planned, nor calculated, nor—as many would have it—orchestrated through parental coercion, but simply out of chance, incredible talent and unconditional passion. “People think that making a film is a glamorous experience and it’s actually not. It can be tough. I’ve had times where I’ve thought,‘Oh God, I wanna go home,’ or, ‘how much longer can I do this?’ What keeps me coming back for more is that, even when I’m having a miserable time, I’m still ultimately enjoying myself and the people I’m around,” says Fanning.

Although she is enrolled in the prestigious NYU Gallatin School of Individualised Study, majoring in Women’s Studies, it never occurred to her to give up acting. Her enthusiasm for the diversity of her profession is too great: “It’s a magical experience: all of a sudden, you are transformed and you don’t really know how you got there. It’s through costumes, sets and the other actors that help you to create characters and transform your-self into another time, ultimately into another person in a way. You get to explore things about yourself through that without actually having to experience those things. However, I’ve never feared getting too lost in a character.” 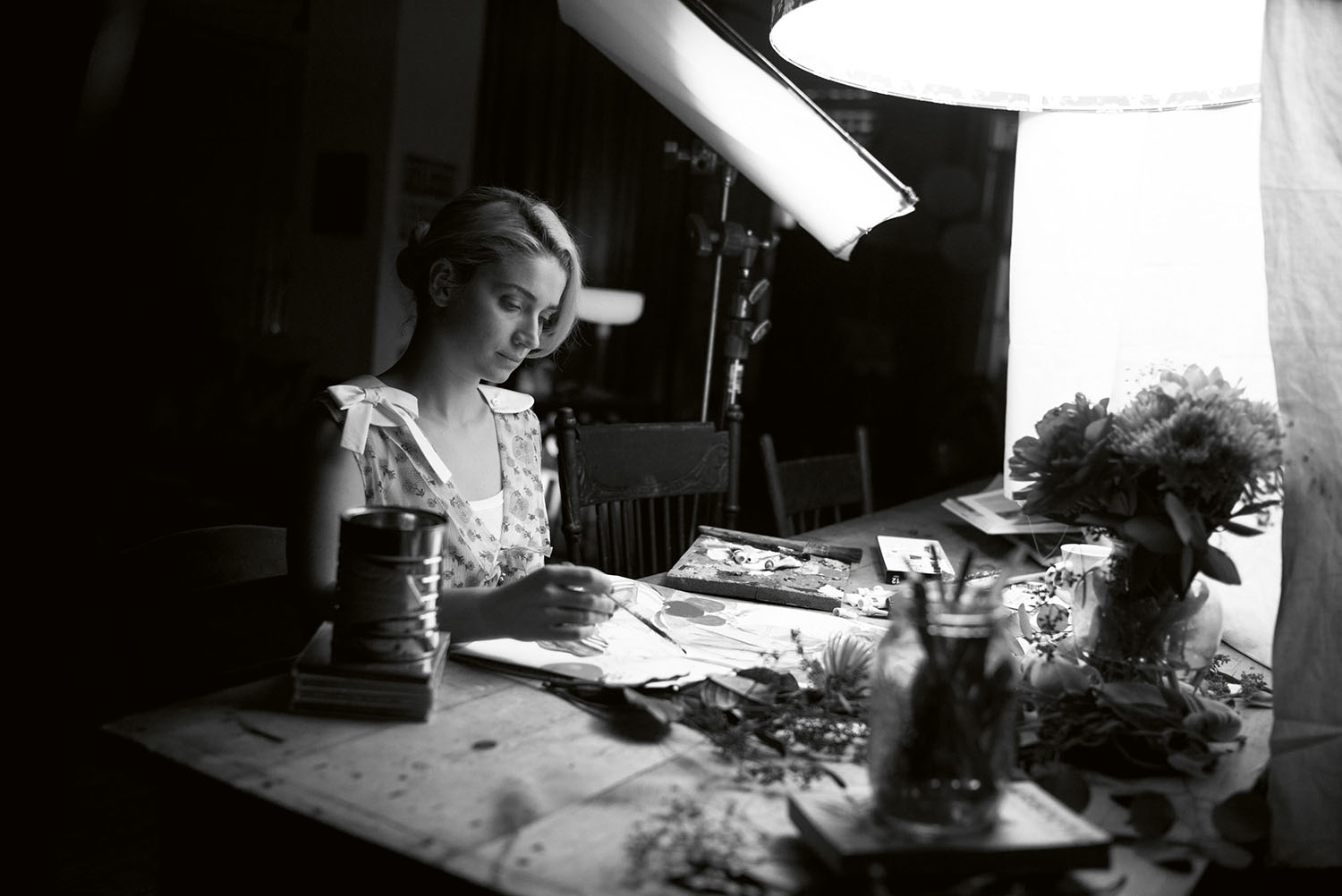 But her profession doesn’t just entail visual and mental role-related transformations: since she was 18 years old, Fanning has travelled the world alone without either of her parents by her side. Her transition into adulthood has taken place in many different locations around the world, in places she’s called home even briefly, like her stint in Europe for a shoot of her most recent drama, The Alienist:“Being in Hungary for seven months has been really transformative for me. I hadn’t been away from home for that long. I was nervous about having to create a new life in a faraway place, away from family and friends. But it was incredible and I found peace in being away from the rush of my normal life.”

This role, which brought her back to television after a decade away from the medium, especially reflects Fanning’s development into an emancipated artist who conveys herself and her environment. As Sara Howard, Fanning travels back to 1896 as an ambitious secretary, aspiring to become a police commissioner, who catches serial killers. In doing so, Fanning continues her tradition of mastering difficult roles which take her away from the flawless glamour of Hollywood. A perfect example: Brimstone, a Martin Koolhoven-directed revenge Western, tears apart the misogyny of the Old West through its leading lady.

From both her personal life and her college studies on the portrayal of women in film, Fanning is aware of the grievances in the film industry but she also sees a change in how openly such issues are discussed: “I think the goal of transparency is being worked towards; the problems that are being discussed right now have been happening for such a long time. The character that I play on The Alienist is living in 1896 but we see very similar situations portrayed then as we are seeing happening in 2018. People trying to change things and listening to points of view, experiences that other women have had.” But does she personally prefer to work with—still underrepresented—female directors? Does she hope the business can be restructured? “As a woman you carry different ideas and perspectives than a man. What’s important is to have diversity in the perspectives that we show through films, TV, art, books. It’s about the balance in the representation.”

Fanning is continually broadening her portfolio to encompass new professional fields. Standing still is not an option. That’s how a new challenge came about which she was able to realise with her long-time partners, Miu Miu: “Directing a film has always been a goal of mine—to do it for Miu Miu’s Women’s Tales was really challenging and inspired me in a different way than I’m used to. It was frightening but it’s important to do things that are sometimes frightening. I loved it but it’s still incredible, surreal.” The fashion label, founded by Miuccia Prada, and the Fanning sisters form a mutually-influencing, stimulating partnership; Elle and Dakota appear in the brand’s campaigns and sit in the front row at Fashion Week. Elle even recently made her runway debut at the label’s AW 18 show. Now, Dakota is taking the collaboration to the next level by capturing her personal teenage memories on film: “’Hello Apartment’ was inspired by my own experience of moving into my own apartment in New York and the memories you create in a room, how these memories are always tied to that room forever. As a young woman, it’s a formative experience to live alone and create your own home, which I wanted to show in a creative way. Bringing another female perspective out into the world is exciting and important.”

After having been able to bring her personal tale to life for Miu Miu, Fanning is ready to write a new chapter in her career and she already has an idea in mind: “There are so many tales, stories that need to be told for and about women. My best friend and I have a dream of making a film about a young woman our age and showing the reality, not the glossy version you see in films. The gritty experiences, the embarrassing moments. More people are open to doing that now and they’re realising that we need more female perspectives. I hope to be a part of that.” Fanning certainly will be—and she’ll help bring about that change she feels is so relevant for others too.