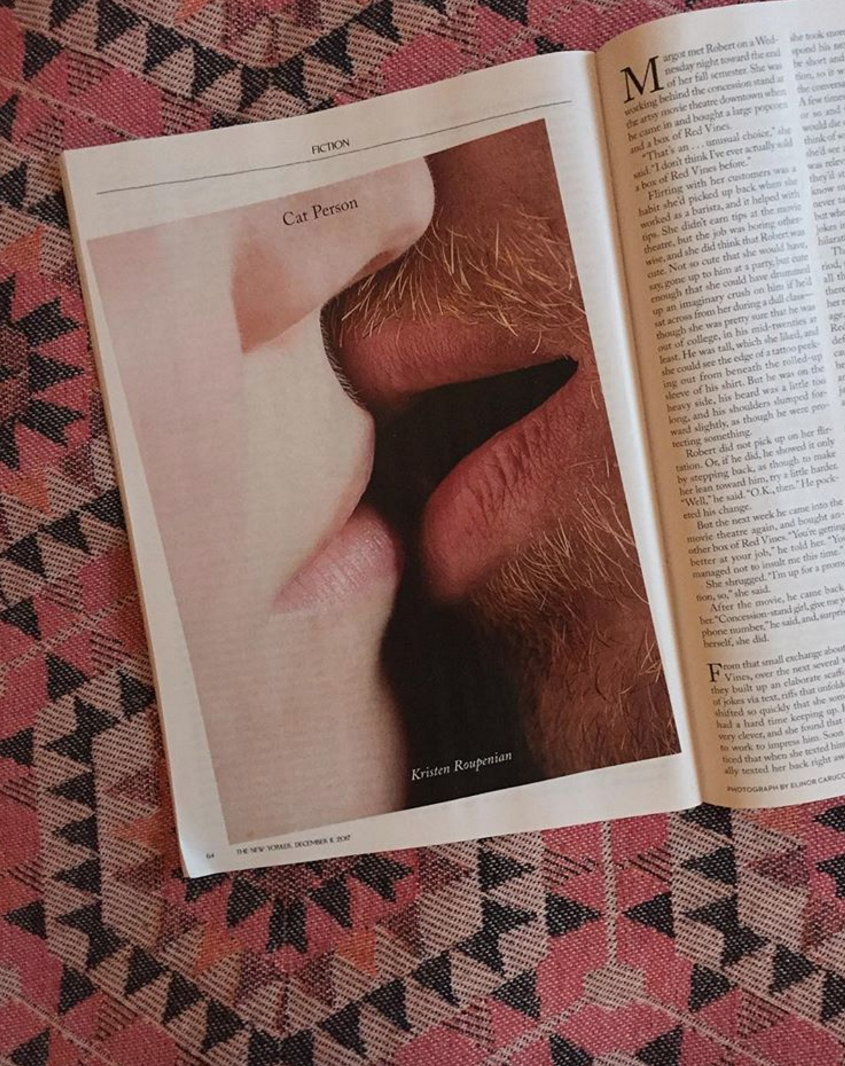 THE DEBATE AROUND “CAT PERSON” RAISES THE BIGGEST ISSUE: WHY DO WE STILL NEED LABELS?

The short story “Cat Person” published by The New Yorker two days ago is a work of fiction. Apparently. But the internet’s reaction shows clearly no one can accept it as such, and its structure reads more as a glimpse into the reality of many young women. There appears to be a fundamental misunderstanding between people on the internet, that a fictional short should be up for such judgement. It’s sad that this kind of reaction still exists on the subject of – I’m saying it – feminism. With so many voices unheard, this energy could be used to explore understanding other current issues in society of a more oppositional nature.

The title itself seems to attack the idea of labels, examining clichés our post-internet, post-truth world spends all its energy trying to define. It quietly tackles the tricky problem of hazy lines between consent and reluctance, between feeling used and being used. It lights up the grey area the internet’s obsession with labels can’t handle. Our collective psyche in the digital age wants to hashtag it, quantify it, put it in a box or group. The reaction to this story reminds us of the depth of individual experience and emotions, and the importance of interpretation as a tool to understanding. As the girl in the story struggles with her definition of the male character as a “nice guy”, we are provoked as readers to consider the stereotyping that comes with internet labels like “cat person”. It’s brutally sensitive and deeply personal in addressing the digital world.

The story hits on current issues of consent and the woman as self-posessor with intense accuracy – as well as the exhausted idea of treating men like they have egos made of spun sugar. Another troubling familiarity that’s heaviness is replaced by breeze is the ever-present threat of violence that lingers for a woman around an unknown man. Her description of her “love interest” is almost animalistic at times, and she barely acknowledges dark thoughts that have become so normalised they fail to shock – the easy possibility of “rape or murder”, when reaching his home envisaging a house “full of horrors: corpses or kidnap victims or chains.” The character of “cat person” is one lingering precariously between threat and vulnerability.

The protagonist continually visualises herself as a product for consumption, especially in the form of a doll – casually swerving the readers mind from picturing a childhood toy, to a silicon body created for just one thing. She mentions feeling tiny beside him – and we lurch back to the ‘60s, the once rebellious words of Sylvia Plath’s “I think I may be enormous” echo, tired, as the protagonist ticks off the invisible check list of physical requirements necessary to be desired by a man.

As women, we often think we “should be tougher”, or feel guilty for over-catering to a man’s needs. Does he like me? Is this the right underwear for the first time he pulls my clothes off? The questions she asks make me forgive myself for asking them too. Repeatedly battered with the male gaze through art, movies and advertising, it’s almost like ‘90s girls were doomed from the start: and what’s changed? Women are still growing hair in the “wrong” places, while we listen to straight male friends discuss if they’re “into it” or not. This blind entitlement that we all accept leaves us at a disadvantage.

And the final point the writer explores is a disheartening background noise in the protagonists brain of what-a-man-should-be. Lurking is the defence mechanism: To replace unsatisfactory possession by one man, to the yearning for being possessed by another. Blame Disney, blame Hollywood, blame what you want, but present in the mind of the protagonist in “Cat Person” at any threatening moment is the idea of some absent, far away hero – how can anyone uphold this perpetuated myth of perfection? What society tells women to expect damages us all.

The hardest fact of all is that it is still necessary to address these issues. With cyber opinions so intent on labelling, it is understandably frustrating to see such a focussed representation of one particular group of people. But this does not mean we, all of us, should slow down or hold back on trying to evolve beyond out-of-date ideas that should no longer be accepted.