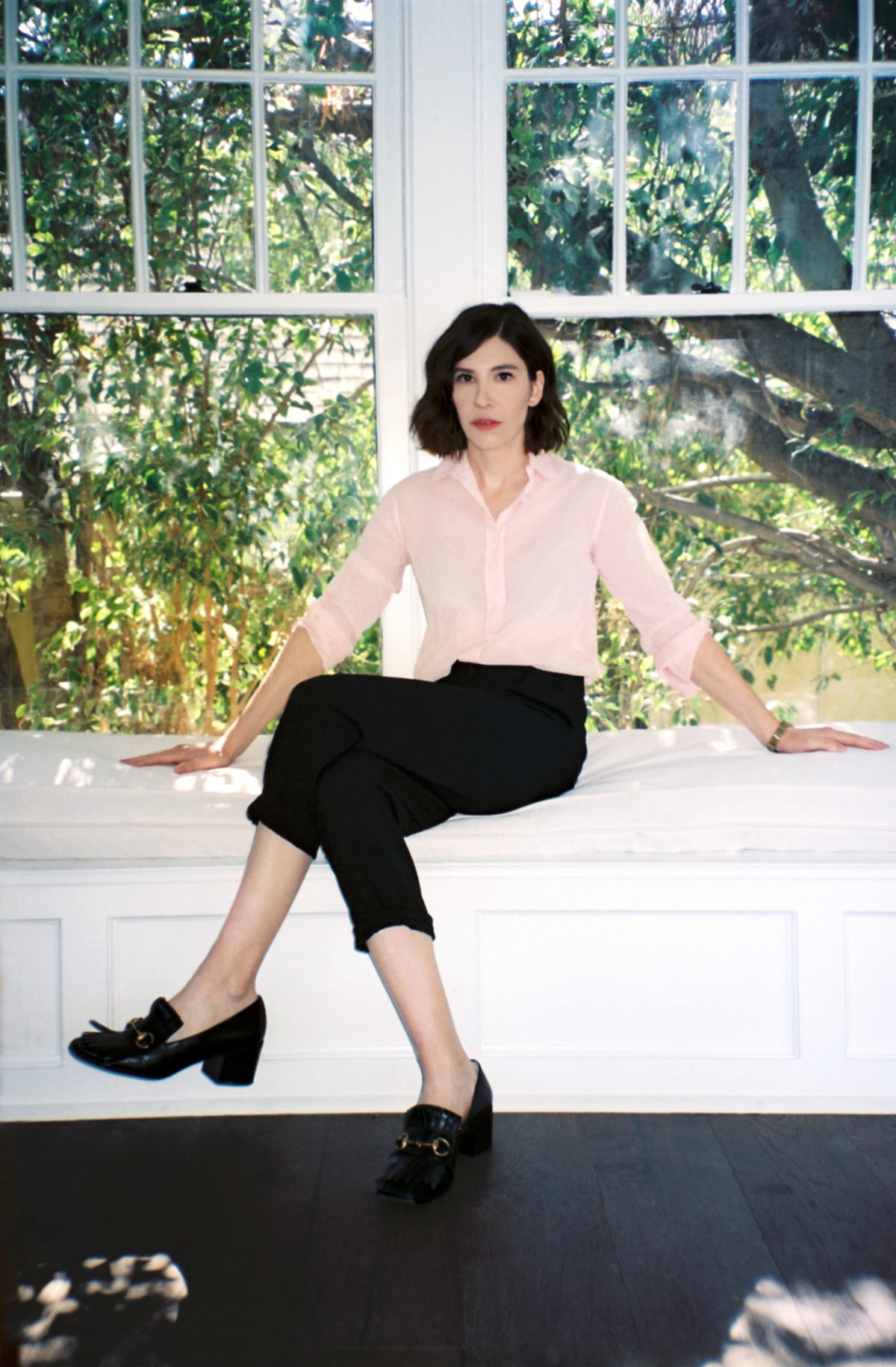 Despite being a multi-disciplinary artist, one format Carrie Brownstein has used, developed and mastered over the last twenty years is writing. “My work belongs to a state of continuum, essentially,” says Brownstein. “Acting, directing or songwriting; they all feel like iterations of myself, they do not ever feel at odds.” This multi-faceted approach, which spans acting, performance, and most recently film direction, leaves Brownstein with a body of work that is both bright and varied at her fingertips.

The artist first cut her teeth at performance with Excuse 17, a group she formed while at college. This then progressed to Sleater-Kinney, an all-female collective noted as one of America’s most essential rock indie groups, which saw Brownstein work closely alongside Corin Tucker and Janet Weiss. In 2011, Brownstein started working on her next project Portlandia, a sketch comedy television show that she would go on to direct, edit and act in. And, with an acute sense of what it means to make a story, Brownstein told her own in 2015 when she released her first book, a memoir titled Hunger Makes Me a Modern Girl.

Creating work is “just part of my day-to-day routine” explains Brownstein, and her process sees her create a body of work made-up of different formats, that always retain a degree of “seamlessness”.

As Brownstein makes the final edits for Portlandia series eight, we asked her to share her creative process with us, and describe how living in Los Angeles impacts this.

Books, lyrics or scripts, you’re always writing something. Can you tell us what you are working on right now?

I have just finished a huge project, which was season eight of a television show I co-created, wrote and acted in: Portlandia. We finished filming this summer, I directed two of the episodes and have now completed all final edits. It’s hard to quantify my work, in that I find it hard to articulate what my ‘biggest’ projects are. However, I would say that most recently this has been my ‘biggest’ project. But, you know, during the eight years of Portlandia I was doing other things as well, other forms of writing, but this is certainly the most recent.

Your work spans so many disciplines: actress, director and musician. How do these creative mediums complement or conflict with each other?

I see it as part of a continuum, essentially. Sleater-Kinney is the band I play in and that involves songwriting, I also published a memoir, Hunger Makes Me a Modern Girl two years ago, this was part of the story, then Portlandia is also part of the story. They all feel like iterations of myself, they do not feel at odds. Something I have been doing over the last couple of years is directing. I directed a short film and now I am directing television shows. Directing is the one discipline where I am not necessarily ‘the creator’. Rather, I come in as an interpreter, it is my responsibility to elevate and translate the work into a visual language, and that feels like part of a wider creative process which is something I am always immersed in. I tend not to compartmentalise. When I hit writer’s block, I move onto music or I start working on a series of essays, so I think moving between all practices becomes part of my day-to-day routine. Of course, if there is a specific project attached to something, then obviously I need to focus on one thing, or one practice, but for the most part there is a seamlessness across all.

And, how do you ensure your dialogue remains fast and fresh?

Well, I think that there is a distinction here. You know, a song can have the same idea or message as an essay, but the form is different. Although you are working with the same letters, visually they take on a different composition. However, I do think that for me, the freshness doesn’t come from working cross-medium, it comes with being open and having as much input as I do output. It is crucial for me to be out there in the world, to go to art galleries, and museums, to see plays and friends because I think if you isolate too much there is an insularity that becomes an enemy of newness. Innovation can come from isolation, through totally tuning out, but I like to create work that is in conversation with people and so I like to feel ‘of the world’ when I am doing that.

It sounds like you are describing a subconscious kind of collaboration?

Yes. When you have an idea and someone adds or transforms that, you have the capacity to reach a conclusion that you may not have reached on your own and I like that process – it makes the work feel very elastic. There are very different forms of collaboration. There is one that is literal, intentional, where one person sits down with another and create something consciously. Then there is work that comes from these stepping stones of conversation, out of the snippets of information derived from other people, opinions, ideas that are changed because of the way they are intercepted by somebody else’s opinions and ideas. I think most people acknowledge that kind of communal energy, and that can be as invigorating as it is crucial. You know, bouncing ideas off of each other, being critiqued, basically just changing one’s perception of something. These are all really important things necessary to achieve an all-encompassing view of what you are actually doing. 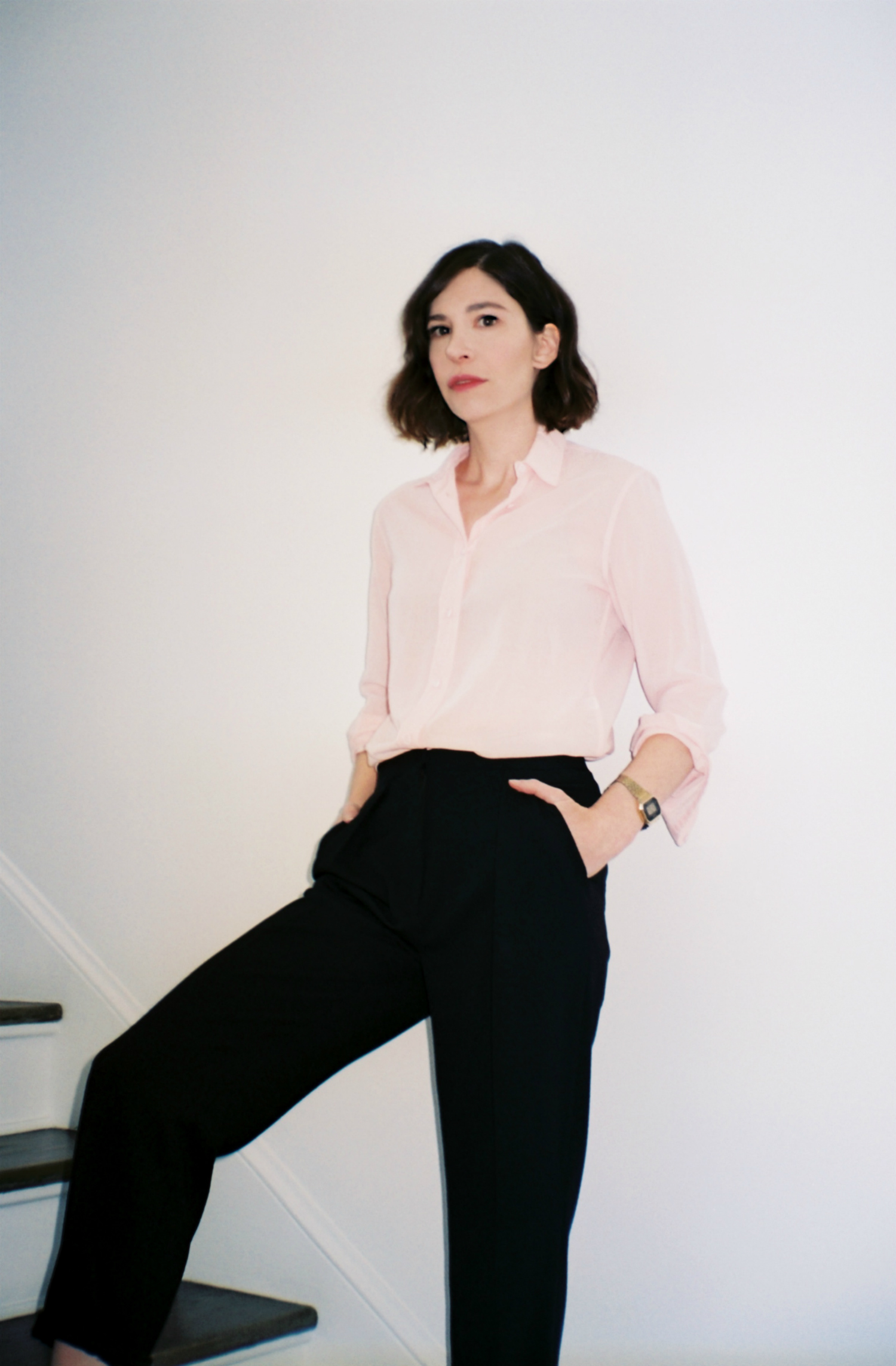 Do you ever consciously look to the work of other women for influence?

When I was younger I really loved musicians. I looked up to Madonna, and women who were part of Hollywood’s Golden-Age like Bette Davis, Greta Garbo and Katharine Hepburn, these highly-respected, serious and independent-minded, impotent-thinking women. I was drawn to the photos they took and how they presented themselves on screen. Then later on, I found punk rock. I loved Kate Pearson, Patti Smith, I adore the work of Joan Didion and I loved Maggie Nelson and Claudia Rankine. Yes, I feel there is an ongoing dialogue with other female artists. I try to engage as much as possible with their work.

I’m interested to hear about how Los Angeles has impacted your creativity.

For me – in terms of methodology – it is different. Landscape is so important for me, and so much of my work used to stem from the greyness, the dampness, the overcast skies of the North West. It created an intrinsic fabric of melancholy that does feel different atmospherically. I believe that the context and space in which one works really affects the work produced, so I am curious to see how this will change my output and process. I will say, that there is much more sunshine here, which is really nice.

What I also like is that there is a stream of creative people here, of which I can enter when and if I choose. I can be immediately inspired by them, influenced by them, and feel in conversation with them, but it is just as easy to remove myself if I want to find internal focus. Yesterday I hung out with three different friends – it was accidental, it wasn’t planned. At the end of the day, I realised that all three women were female directors, and I had had three very different conversations, one in the morning, one at lunch and one at dinner. This is what is so wonderful about living in LA, being amongst like-minded people who are striving to make interesting work.

What are the biggest social challenges that women in LA’s entertainment business are facing?

Well, obviously there is a lot of global awareness stemming from sexual harassment, violence and predatory behaviour by men on women, and sometimes on other men, that has permeated the conversation in LA, and I think beyond. It is important to acknowledge that for the most part, it took a number of well-know, well-off, white women to bring about this level of awareness and sympathy. However, in all aspects of life and work, and in all facets of living in a cross-demographic, people are susceptible to challenges and to the abuse of power, so this is just shining a light on one small fraction of society. And, hopefully it will become a conversation that is not just about the entertainment industry, but it is a useful microcosm.

I really think a lot about that David Foster Wallace ‘This is Water’ speech. So, there are two fish swimming, and they happen to meet an older fish swimming the other way, who nods at them and says, “Morning, boys, how’s the water?” And the two young fish swim on for a bit, and then eventually one of them looks over at the other and goes, “What the hell is water?” It’s fascinating. I think there is something innate about being a woman, where you make micro adjustments every single day to ensure your safety, to adjust to the way you are being looked at, objectified, diminished, so it really is about cataloguing a litany, a lifetime of small transgressions and I think that is what is so sad about it. There are the things that are criminal and illegal, all the way down to inappropriate, but I think you just forget how many minute changes you make every day, in order to accommodate someone, or to protect yourself. It’s hard to quantify these things because they are so common, they are so responsive, so much so that you often overlook these changes. They are a product of institutionalised sexism, it’s how we were raised. I feel relieved that the conversation is coming to the forefront. 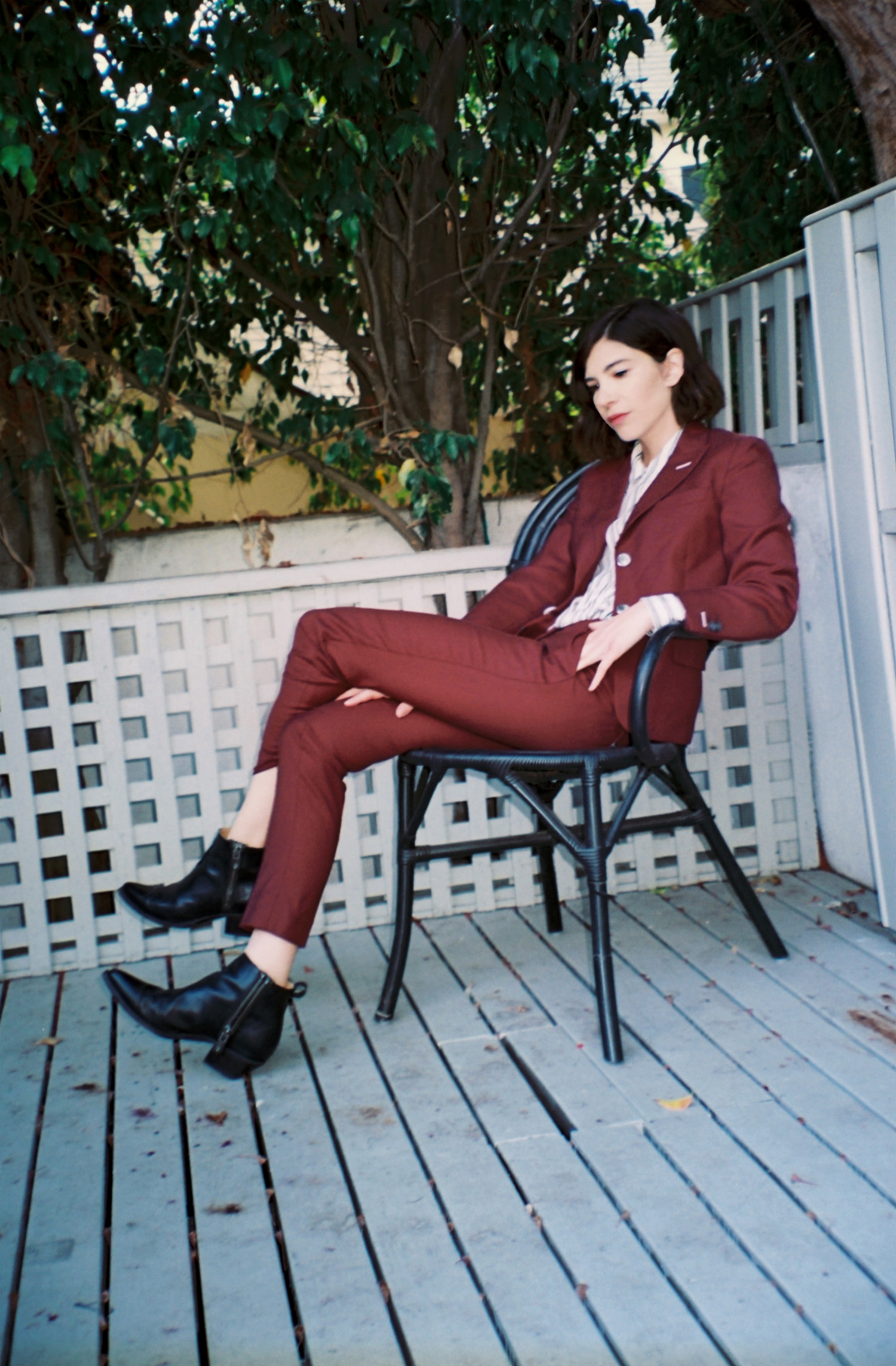 What advice would you give to women trying to forge their own creative path?

To find allies. To have a sense of their own worth. To not make compromises. To be bold, to be brave. To be honest, I think it’s important that we also recognise that now people are listening, they are more susceptible and more receptive to women’s voices, to the words of victims. I would hope that as an artist, or as a creative that they would continue down the path that is passionate, that is striving and fearless – all those things. I just hope that now more people have your back at least, or that you have other people’s backs, so that for with every step forward you are laying a track down behind you so that other people can get there too.
Photography by Kristy Benjamin