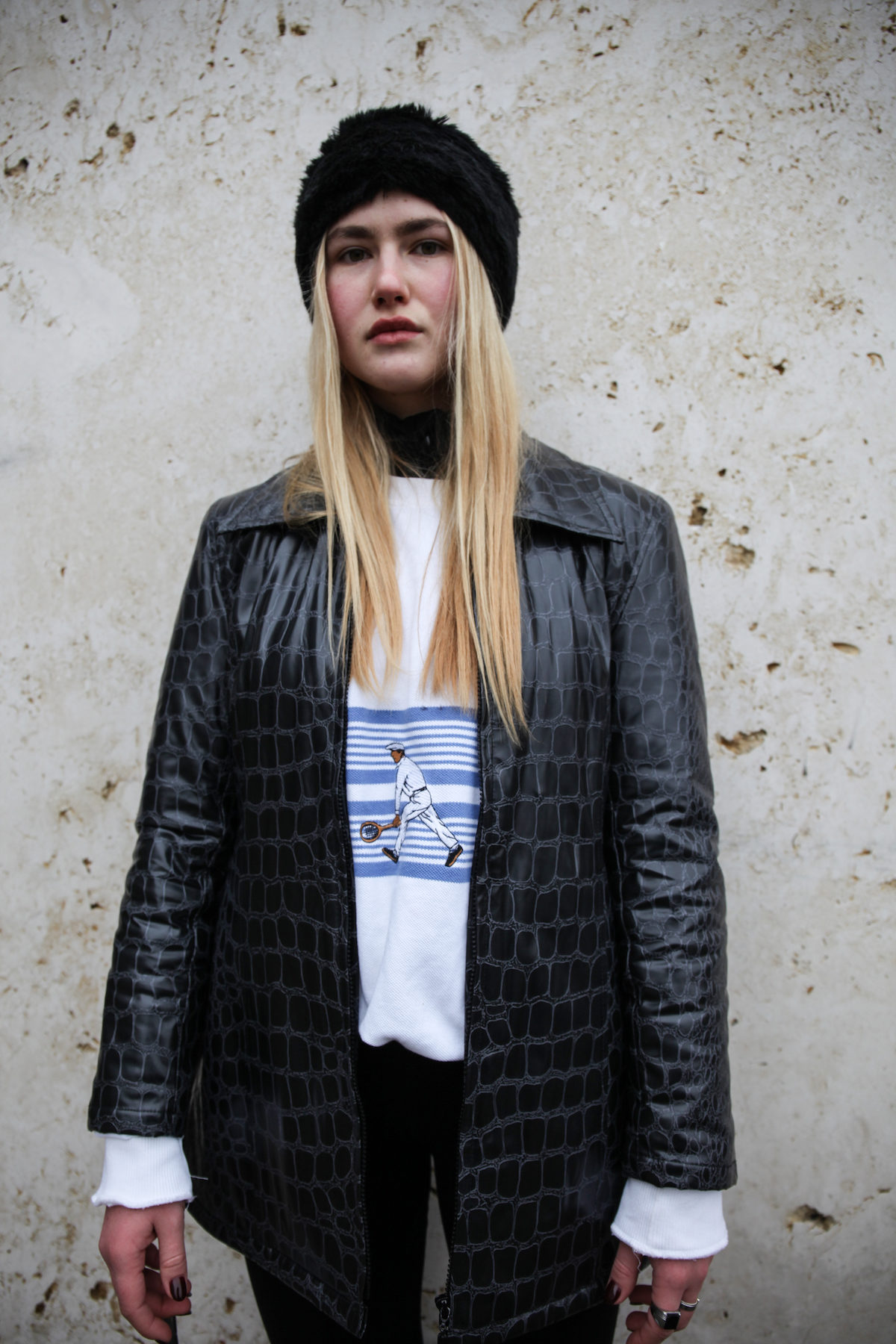 With yesterday’s Women’s March taking place at the famous Brandenburger Tor location in Berlin, people of all genders came together for the anniversary of the first march that saw a record breaking number of people come together for women’s rights. And as Trump slowly and quietly cuts out rights put in place for women, or simply silences their desires for more equality, people are refusing to keep quiet. Starting with his repulsive, and now infamous, comments about having enough money to “grab them by the pussy”, he continued on to win the presidency.

Shortly after he entered office, Trump removed protections for transgendered people in the work place, hired more old white men than can be found at a Florida poolside, and had to be educated on what women’s health actually “is.” So far, he has succeeded in cutting funding to sexual health clinics across the nation (the US now has seven states that function with just one abortion clinic), reintroduced the global gag rule, narrowed access to free Birth Control, and appointed many anti abortion activists to key posts in office. If you still don’t think he is the world’s biggest asshole, here is a video where he proudly confirms himself as a misogynist.

Now more than ever, we need to come together to support each other and to make our voices heard. People must be reminded that things urgently need to change. Material caught up with some protestors on the march in Berlin, to ask them their views on women’s rights, activism and a world where the US president is an open believer that “putting your wife to work is dangerous.” 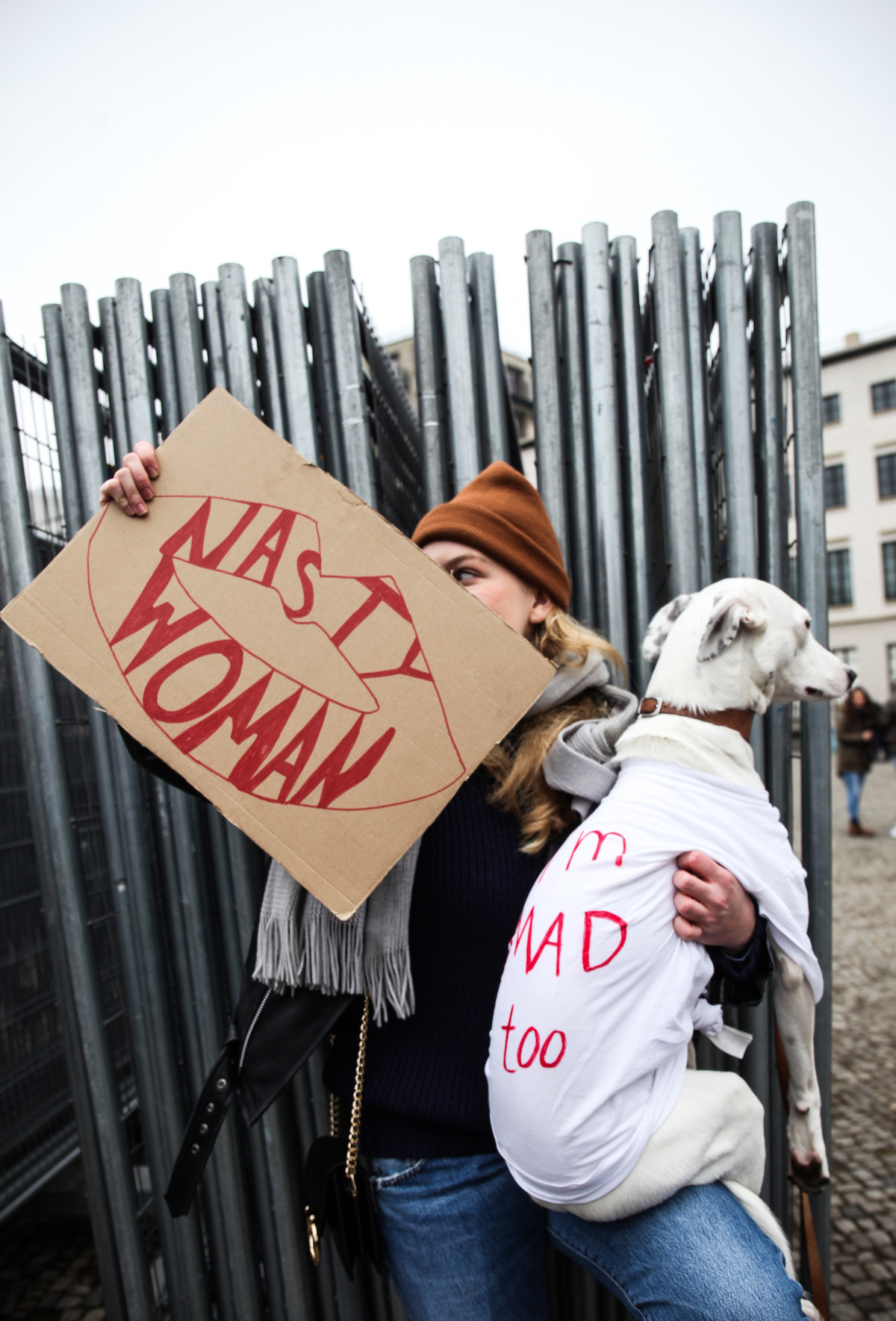 Why is this movement happening now?
I think what’s happening now has actually been happening for years and years. Its only now via social media the movement is gaining more momentum and more voices are being heard. It’s a matter of finally stepping up for our rights.

How does inequality affect you most directly when it comes to women’s rights?
Last year I was sexually assaulted. There wasn’t really anything I could do, or anywhere to go. If you break your leg, you go to the hospital. But there wasn’t any structure and it was really scary to be left in the air. It was a crime – but I felt like there wasn’t a place to go or anyone there for me. I had to find help through Google. I finally found help in communities but there should be a really open clear road for what you do in a situation like that.

Do you think women have a stronger voice and are being listened to more than in the past?
I think if you go back to when women started to vote that was one of the first steps. I just think people are now thinking about it more. But I don’t think women are listened to more. It’s hard. I think that as a reaction to Trump it has been brought into the public in a new way.

What do you think would be an important change in a society that’s still very patriarchal?
In Germany, for example, it’s in the language – the way you address women or girls. Sluts or whatever. People take the position of calling feminists man haters – putting everything into one bad category. If you’re a feminist you’re a “man hater.” Or “she just needs to get laid.” Women also are way more limited to their outward appearance. You are judged immediately – you are this, you are that. There are too many categories for women, and people in general. 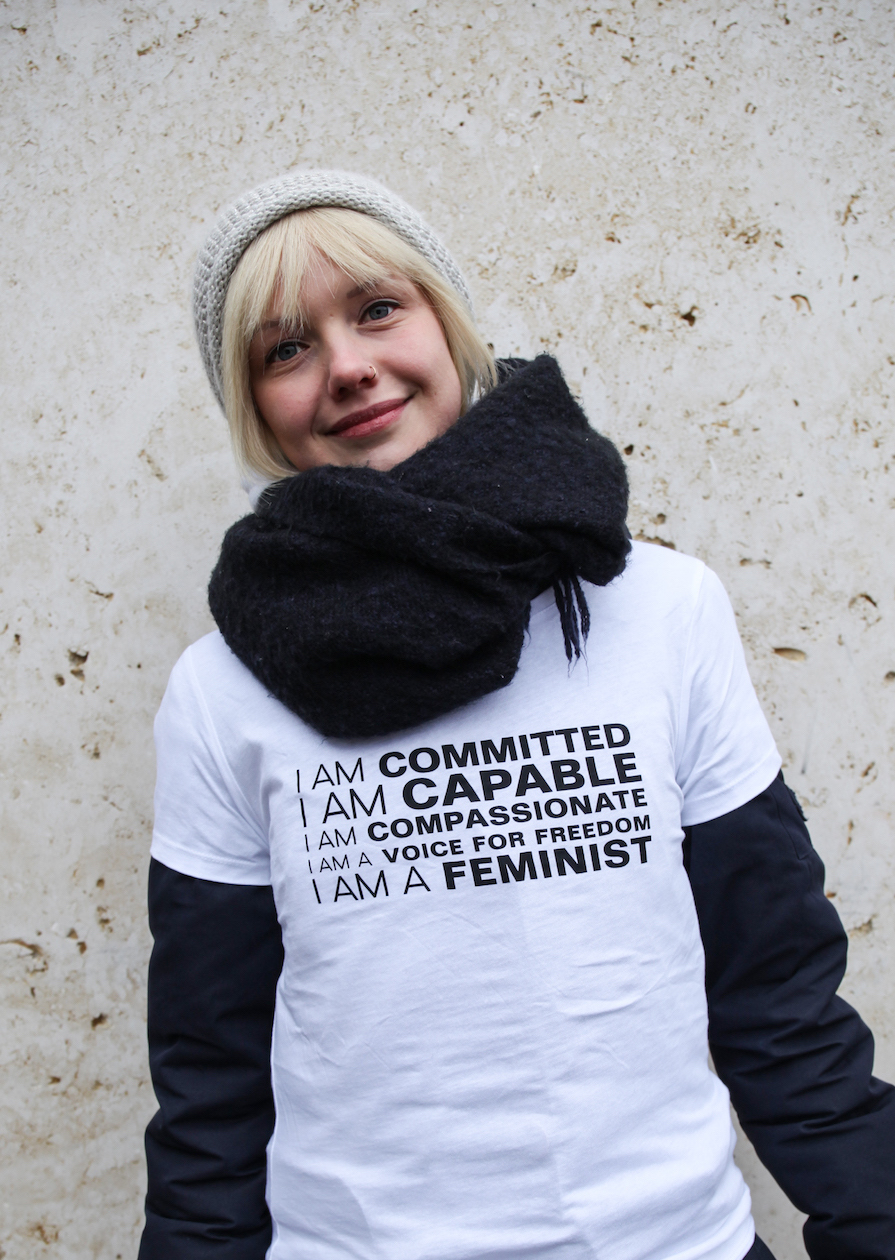 People see Berlin as a liberal open place. With that comes the expectation that perhaps sexism is less of a thing here. How true do you think that is?
That’s a big question. I think sometimes in my little bubble everyone is more liberal, and sexism doesn’t play a huge role. But even in that case it exists. Its more subtle, but people still have a certain picture of what I am doing right or wrong, just because I am a woman.

How does the way society treats women affect you most directly?
For me, it’s anger about girls not having the same choices. Feminism for me, just means having a choice. If I choose to dance and paint my wall pink then that’s great, or if I choose to play sport that’s also great.

How can we affect change towards these issues?
We can organise groups and get together – I am part of an association called WILPF. We try to help girls in helping other girls – just to be able to live more freely. In a larger way, WILPF takes place in UN gatherings.

When did the organisation start up?
It was started in Berlin about three years ago. We started with a women’s café and came together to help refugee women to find places in Berlin, and to speak in a safe space. And now we are also focusing on connecting with other organisations.

Do you have any advice of things we should do as women to affect change or support each other in these times?
I think the most important thing is for us to unite. To stand together, to go out on the streets and talk about it. To get involved in women’s rights organisations – to try to affect people.

How does the way society treats women affect you most directly?
In Germany the idea that “no means no” is only just becoming a thing. People tend to think “Maybe she kind of wants it, she just doesn’t know.” This is what bothers me most – we think we are in a modern world, but for women saying “No” doesn’t always get heard.