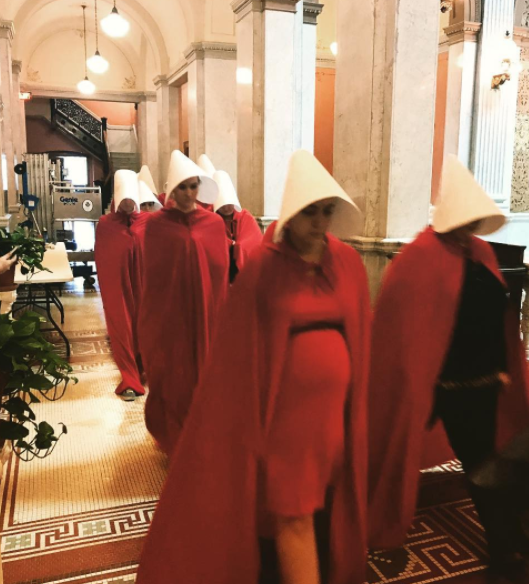 A group of women make a powerful statement as they dress as handmaids from The Handmaid’s Tale, a series based on Margaret Atwood’s bestselling dystopian novel. The series is set in a totalitarian society ruled by a fundamentalist regime that treats women as property of the state, where fertile women are forced into sexual servitude.

On Tuesday, the Ohio Handmaids gathered at the Statehouse wearing red robes and white bonnets to protest Senate Bill 145, which proposes a ban on the most common method for second trimester abortions, Dilation and Evacuation. D&E is considered to be the safest method at this stage in the pregnancy, The Guttmacher Institute state that banning this procedure would disproportionately affect women who are already at a disadvantage when it comes to obtaining timely abortion care. The bill is sponsored by members of Ohio’s Republican Party who claim they want to bring an end to what they describe as inhumane and brutal dismemberment abortions. Anti-abortion activists have been empowered by the Republicans recent control over the White House and Senate in November’s election. Whilst in the past President Trump expressed support for Womens right to abortion, during his election campaign he implied that his views had evolved.

The Handmaid’s Tale has provided a powerful form of protest for pro-choice advocates to push back. Whilst the poignant protest went viral on social media the effects are yet to be known as the bill has a long way to go before becoming law.

The #OhioHandmaids are awaiting the next hearing to restrict their rights. pic.twitter.com/ZnVt79Bf9B