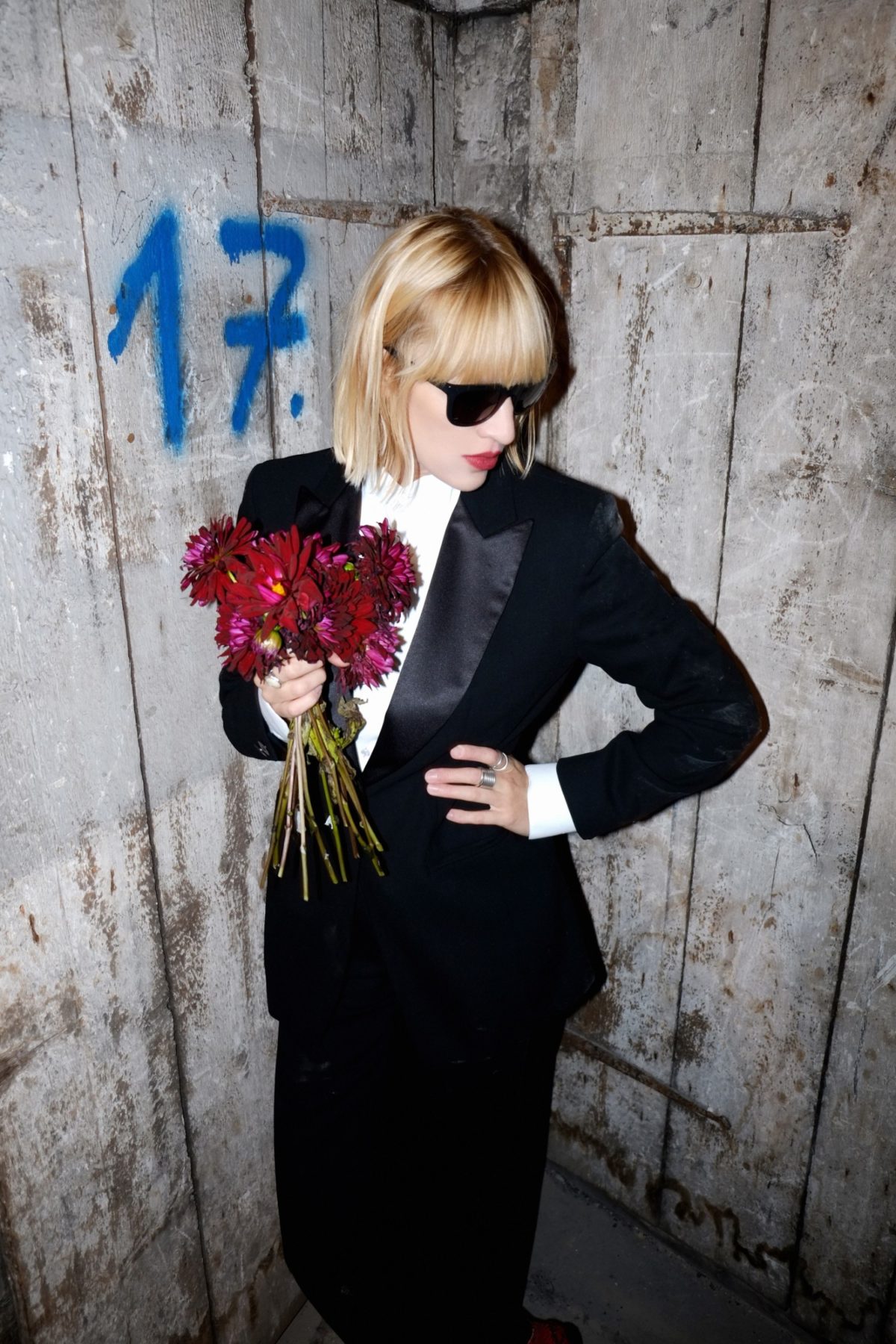 THE GOSPEL ACCORDING TO TERESA ROTSCHOPF

Nearly 12 years after she made strides in the music industry as Suzy on the Rocks in acclaimed electro-pop band Bunny Lake, Vienna-based musician Teresa Rotschopf is embarking on her own path. The first stop? Her album “Messiah”, an intensely melancholic labour of love that reveals more about Rotschopf than Bunny Lake ever did. Amidst this profound turn in her career, Material sat down with the singer to talk through her creative process and hopes for the future.

What’s your first musical memory?
Me playing “Step by Step” by New Kids on the Block on my plastic guitar I had gotten from my grandmother, and my neighbour peeking out of her apartment to tell me to turn the radio down. I was so proud.

How did you get started? Did you have a classical education?
I started playing the piano when I was five. I always loved to play but hated to practice, and never learned to read music because I could play it by ear instantly. Even later, when I actively tried to teach myself to read music, I never managed to. It’s very abstract for me, and in a way also interrupts the flow: up to this day, when I work with professionally trained musicians (who mostly expect to play from scores), I explain my music and what I expect them to play via emotions. I sing it or hum it to them.

When I was ten, I started with vocal training and kept this up for about seven years. I always really enjoyed making music, but it never occurred to me to make a career out of it. My family is very down to earth—both of my parents have been employed their whole lives—so “making music” never seemed a good career choice. It was never a conscious decision, but has become so important that now it is a necessity for me to make music in order to be happy.

You were part of a band before. How was that experience and why did you leave it?
I joined my former band Bunny Lake when I was nineteen, and had just recently moved to Vienna. Everything was so new and exciting: going to the studio, writing songs and recording, shooting videos. In the beginning, my role in the band was seen as “temporary”—other guest vocalists were invited—and the decisions were made by the guys who formed the band. I was just happy to be on board. This changed after a few gigs; the chemistry was magic, especially at live shows. As I grew older and more confident, I realized that my role in the band had become central—I wanted to make decisions, or at least have the same rights as everybody else involved. This wasn’t easy, and that’s when the struggle began, because I wanted to grow as an artist, I wanted to try out new stuff. I wanted to take paths that hadn’t been taken before, and more and more it became clear that this was a process I could only go through on my own.

What are the biggest differences between being in a band and working as a solo artist, when it comes both to the creative process and being on stage?I’m the one in charge, I’m responsible for everything. And that’s how I want it to be. I don’t want to discuss weird sounds, and I don’t want to talk about if it’s ok to use this or this image for a shoot. It’s all up to me. This is very liberating on one hand, but also quite scary on the other. If I’m in doubt there is no bandmate to pull me out. I have to pull myself out. I have to keep going, every step of the way. So this is a major difference.

On stage I am used to being in focus, so that doesn’t bother me at all. What’s different now is that it’s my feeling, my struggles and my most intimate secrets I sing about. This is scary but also very liberating, as it allows for me to communicate a side of mine that I don’t necessarily show in everyday life.

This record has been quite a long time in the making. What are the biggest changes or events that have happened in your life this years and how have they shaped you? And how have they had an influence in your music?
Everything started out of this deep urge to make my own music—I wanted to explore how music coming out of me would sound, wanted to experiment with sounds that had been in my head for so long but never had a chance to be heard. So the first song I ever wrote was ‘Love’. I was in my little home studio, with my vintage organs and my crappy mini keyboard, a bottle of wine and just gave it a go. When I had finished in the morning and listened to the outcome, I had no idea what this was supposed to be, and if it was any good. Why was my voice so low? But still, I was so happy, because what I could definitely tell was that this song is so “me”. That’s addictive. It expressed everything I wanted to say in this moment. It’s a love song to my now husband, I was so proud. And from there on it went. I knew where I wanted to go, had no idea how to get there but just kept writing and writing, song after song, and every time it got a little too weird I stuck to the path and explored what’s down the road.

Also, love stayed and I had my first son, Caspar, whom I wrote big parts of this album for. Messiah. He’s my Messiah. And six months before Messiah was finally released, my second son Thelonious was born. So he’s my Messiah, too.

Where do you usually find inspiration?
Everywhere and nowhere. And in myself.

Take us through your creative process.
It mostly starts with a sound. I sit in my studio, try out every organ, every synth there is, searching for a sound that interests me, catches my attention. And I take it from there. I’m very interested in mixing things you are not supposed to mix and just finding unexpected twists.

Mostly I just have to be in the right mood and state of mind—not to want anything and not to expect anything from the outcome. Then it’s easiest for me. I have to feel very connected to myself and I have to be willing to dig deep and get in touch with the most vulnerable sides of myself. The process itself is mostly unconscious. I have to be in a flow, at least for giving birth to tracks. The production process in the studio later, with my producer Patrick Puslinger, is completely different. We talk a lot about music, about sounds…our decisions are made, of course, very consciously. But the first sparkle—from nothing to something—this is where the magic happens.

Has music always been your main thing and profession?
I’ve always been doing quite a few things simultaneously. When I first moved to Vienna, I worked as a model, was a stylist’s assistant, started to sing in a band, went to University for my Masters in music and sociology. I also enjoy mixed media—I recently started to do art direction and have done a few artists books for museums. But music is and will always be my main passion and output.

In your album, you featured and collaborated with a lot of other artists and musicians. What do you like the most about collaborating with others?
It’s the point of losing control that I enjoy. When you work with others, you have to let them be in charge, otherwise it’s not fun and there’s no point in doing it. So I take my tracks as far as I can—but at a certain point I need help to fulfill my desired sounds.

Patrick once said that my album is very generous and not very selfish. I give a lot of space to every artist I invite, I choose them well beforehand, and trust them and the process fully. I don’t just hear an instrument play the right notes at the right time, that’s not my approach to music in general.
For the cover, I knew from very soon on that I wanted Elfie Seomtan to do the picture—her approach to women, as very strong and stubborn in a way, and very own sense of aesthetic has always fascinated me. I had this gut feeling that we could do something very special together. When I came up with the album title “Messiah” and got pregnant a little after that, I knew that this was the time to shoot the cover, and I was right. Elfie was very open and enthusiastic about my ideas and the shooting was just beautiful. Two weeks later, Caspar was born.

The songs are very heart-felt and intimate. Do you write from personal experience or as a fictional character feeding from other people’s stories also?
Oh, it’s so personal. It’s very intimate and daring. Like I said, it’s sides of me I usually don’t show, or I just don’t know how to show. It’s things that overwhelm me, things I can’t express otherwise. In the process of writing, not only my sons were born, but death was also very present in our family. So it was very hard to even know what my feelings were at some times, but I knew that I needed to get them out in the world, otherwise I would have exploded.

Where do you usually find inspiration?
It’s almost cathartic. I want to connect with other people and I want to be vulnerable and emotional. Contrary to what society tells us, it’s not weak to show emotions. It took me the whole process of writing this album to find that out, and so it makes a lot of sense to know that people all over the world can listen to and connect with my music now.

Playing live is the same: here, too, I am naked and very vulnerable. Sometimes I cry, sometimes the audience cries, but we’re in it together. But then also I can’t keep this high intensity up with every concert. This would wear me out too much. So there are gigs where we play, have fun, don’t take it too seriously and move on, too. I enjoy both, though I’m pro-high intensity, no question.

This debut album has a very different sound and vibe than your previous projects. Why?
Because I wanted to try out something new. Something different, something that is very me, and no one else. In a way, it’s my liberation and also a feminist act of taking on responsibility.

What are you looking forward the most in this new chapter now that the album is out to the world to listen?
To playing as much as possible and to going back to the studio for my second album. I have quite a few tracks that I need to work on, and also ideas I want to pursue and instruments I want to try out.