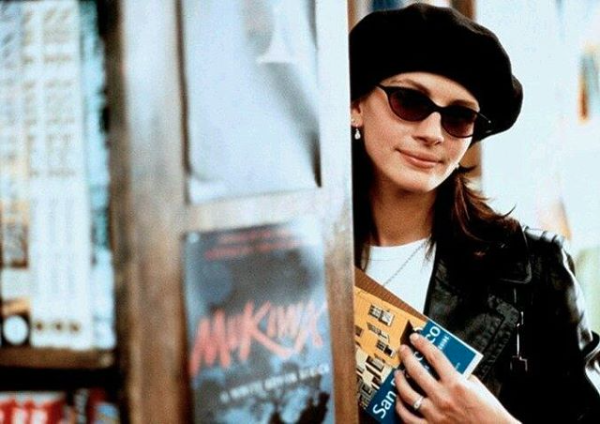 Anna Karina’s Wayfarers in Le Petit Soldat; Miranda Priestly’s oversized specs in The Devil Wears Prada; Betty Draper’s prim white frames in Mad Men; you could almost tell a film and fashion history by means of the on-screen sunglasses worn by the stars of film and TV. With summer still here (and staying for a little while longer, we hope), we’ve put together a few of our favorite eyewear moments from the big and small screens, along with some modern-day suggestions to recreate the looks.

Holly Golightly’s chic cat-eyes, Breakfast at Tiffany’s
In perhaps one of the most iconic moments in cinematic history, Audrey Hepburn peers through the window of Tiffany’s, croissant in hand and with a pair of now-iconic black cat-eye frames perched on her face. So chic! So sleek! So elegant! To recreate Hepburn’s look, and stay coy even when eating your breakfast on the go, check out neubau eyewear‘s “Carla” frames.

Annie Hall’s smart-sexy eyewear, Annie Hall
If there’s anyone who can pull off laid-back oversized specs, it’s Diane Keaton in Annie Hall. As much a part of the character’s look and persona as her androgynous deconstructed suits and dry humour, VIU’s collaboration with THIS IS JANE WAYNE updates Keaton’s very 70s frames for 2017, injected with a suitably throw-back orange hue.

Carrie Bradshaw accessorises in purple, Sex and the City
The on-screen wardrobes of Sarah Jessica Parker and her co-stars are so fabulous that there’s a whole Instagram account dedicated to documenting them. While there are many bespectacled moments we could pick from for this one, we think these frames from YUN do a pretty good job of capturing SJP’s look here, the perfect epitome of fun 90s fashion.

Don’t forget that she’s just a girl, standing in front of a boy, wearing some really great sunglasses… The super feline eye of Julia Roberts’ specs in the classic rom-com lend the superstar actress, playing a superstar actress, an air of mystery and quirkiness. Look to Le Specs to recreate her effortless cool.