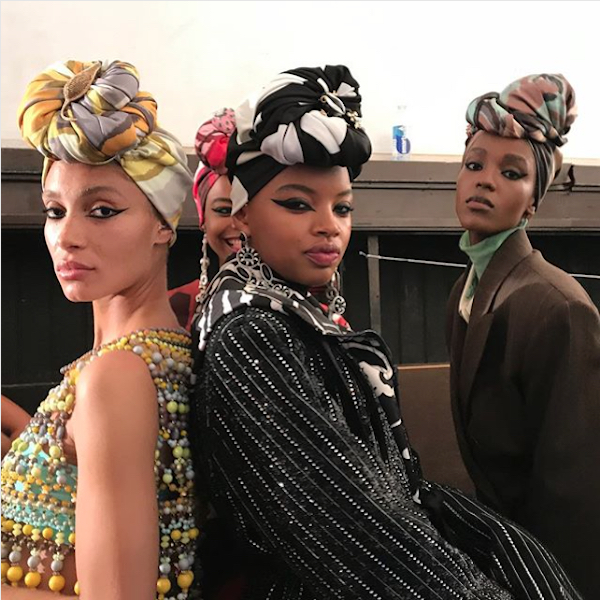 There seems to be a new sense of excitement revolving around New York Fashion Week this season. Maybe it’s the Celine Dion effect that has been hitting the fashion scene during couture week last July, where the singer has been celebrating designers with pure excitement from the first row and equally got celebrated herself in her couture looks. Pure joy towards fashion, its makers and wearers – doesn’t sound like to bad of an attitude, does it?

Tapping right into that idea, Marc Jacobs this season closed NYFW with a finale more than worth waiting for, and fulminant focusing on fashion itself. Known for his often monothematic approaches to his collections – think Hip-Hop last season, and the highly debated ravers with dreadlocks one year ago – Jacobs this time around ditched the youth-centred approach, but looked back to iconic designers and details themselves. Reminiscing of Yves Saint Laurent, with colourfully sparkling jackets and turbans draped around each models’ head, and called “Somewhere”, after the Sofia Coppola movie, Jacobs’ collection communicated major fashion without too many words – fittingly, the soundtrack was just: silence.

Looking to leave a much louder and adrenaline heavy mark than Marc, it also was Rihanna‘s turn to take over New York Fashion Week this season. After debuting her first Fenty Puma collection one year ago in Paris, she this season set out to conquer a new fashion capital – on a motorbike. Doing impressive stunts between pink dunes, motorcyclists accompanied Rihanna’s models as they strutted down the catwalk, or should we say highway, in a variety of colourful aerodynamic looks, ready for their next adventure, and may it just be on Instagram.

Speaking of adventures on Instagram – this season also saw the first capsule collection of Shayne Oliver for Helmut Lang, which, in the months leading up to NYFW, has caused quite a stir with its high-profile ad campaigns spread all over the social media platform. As for the catwalk adaption of these teasers, Oliver looked to translating Lang’s iconic 90s vibe into a language for current fashion obsessives, focusing on the brand’s leather and minimalist heavy legacy. The former Hoody By Air creative director has also not for nothing become known for taking fashion from its pedestal and bringing it closer to the streets, a thought he also followed with his Helmut Lang show, presenting a diverse cast of models along with his vision.

Which brings us right to Alexander Wang, who took the word “street” quite literal, as he staged his whole show in a blocked off street in New York’s neighbourhood of Bushwick. Letting attendees wait over an hour for his show and showing a nothing-new variety of short, sparkly dresses, Wang seemed to may have prioritized the party over a particular viewpoint when it comes to his designs this time around though, bringing the noise that Jacobs luckily was missing.

Overall, in a time as confusing, and overblown with voice and noise, it seems to be the silence, the softness and delicacy that designers have been seeking. Mary-Kate and Ashley Olsen of The Row said they intentionally stripped back their show, to show lightness as opposed to the heavy weighing reality. Thinking about a city as intense as New York, nestled into one of the most observed countries of the world right now, this might just be the way to go.