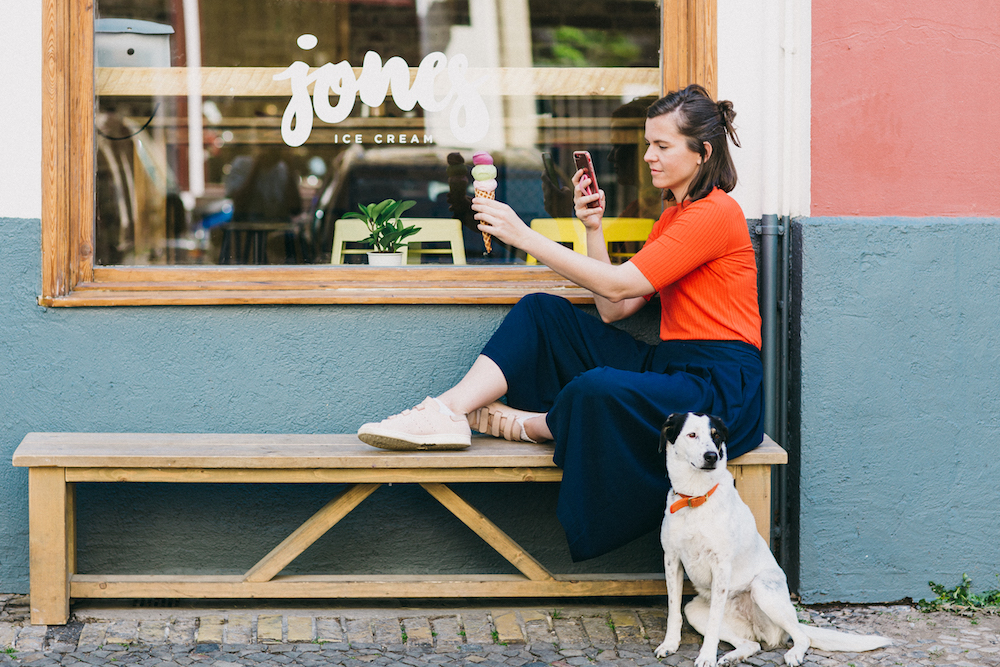 There is a writer who makes Berlin’s blogosphere exciting. The blog is not about the latest subtle accessories to get to perfect your summer look or the most promising electro band to listen to. It is about Berlin’s burgeoning food scene. Mary Scherpe is the founder of Stil In Berlin and explores the capital’s food hidden gems to seduce your taste buds. “I am an eater, not a chef,” she claims. In 2006, she launched this concept as a university project without thinking it would become her full-time job a few years later. I meet Mary and her dog at Sweethearts, a brunch spot in Neukölln. After getting some rosemary lemonade and French-toasted brioche, she tells me the story behind her blog, her favourite restaurants, and why food makes Berlin your next go-to culinary destination.

You’ve been running Stil In Berlin for 11 years now, why have you decided to focus on food through your blog ?

I think the food scene is currently the most interesting scene in Berlin. It’s where the most things are happening and where the most interesting people are working. Today, many people come to Berlin to work in that field, and that’s a new thing, really. I like discovering a place or a city through food and get to know the people who make the food, also because food tells you a lot about a person.

What makes Berlin so special about food ?

Berlin, as we know it now, is actually quite young, the city was reunited only twenty-seven years ago. For a very long time after the wall came down, the only thing you’d know about food in Berlin was how cheap it was. And there are to this day enough people who think Berlin’s food is nothing but Currywurst and Döner, just cheap fast food. And while there has already been a very small fine dining scene in Berlin, the average quality of restaurant food wasn’t great. Only five to eight years ago, people in Berlin started to ask for and go for more diverse, quality food. Which had a lot to do with more and more people moving to Berlin from places with a rich food culture. So people started opening their own concepts and restaurants, and at the same time started to discover and appreciate the already existent Arab, Middle Eastern, and Turkish food scene. We’ve got a lot of really good Lebanese and Turkish restaurants that finally receive the praise they deserve outside of their own community.

More about this wholesome, sustainable, and really, really delicious brunch (and speciality coffee) place now on #stilinberlin.de 🌱 #berlinbrunch is #eggcellent

What is happening right now in the Berlin food scene ?

We’re currently in a situation where a lot of people are looking to open new places. A lot of very talented, eager, and motivated people, in fact. However, the situation of real estate is rather tense, many investors and owners know about the demand and prices are rising every week. So it gets harder and harder to find a space which you like at a price that enables you to run a profitable business. Berlin benefited from affordable lease contracts for a long time, and this is slowly coming to an end.

Which are the four Berlin food spots we should absolutely stop by ?

I will definitely send you to Sweethearts in Neukölln, for their breakfast and brunch because it is a very lavish and crossover version of Australian-German-Berlin food. Their dishes are a bit messy and over the top and that makes for a very pleasant experience. They have to shut down due to real estate issues end of July, so you should hurry. You should also check Bonanza Coffee, they were one of the firsts to do speciality coffee in Berlin, and now have a stunning rotisserie and coffee shop in Kreuzberg. For dinner, I’d choose Lode & Stijn and have their tasting menu, because they do an amazing job with local ingredients and combining very fine food with a casual atmosphere. Then, I’d probably go to Jones Ice Cream in Schöneberg who do artisanal, small-batch ice cream in very bold flavours which they serve in their freshly baked waffle cones.

Sad, sad news for brunch in Berlin – @sweethearts.berlin will close its Neukölln location end of this month due to reasons beyond their control. What we can do? Eat their lavish dishes as much as we can for the last two weeks. And then pray for them to come back at another place sooner than later. #berlinrealestateisabitch #eatbruncheveryday

Where can we find you in Berlin ?

Definitely outside of Berlin walking the many forests of Brandenburg with my dog. That’s where the all greenery comes from on my Instagram. Then, you can find me around the canal in Kreuzberg. Also, my friend is currently running a programme called Tropez in a public pool in Humboldthain, where she serves the most delicious pool-side fries as well as an exhibition of contemporary art, and a program of performances, readings, and screenings, so I might be there as well.

Need to make the most of every day it’s not raining. #nicothemutt

If you had the chance to go abroad and launch a new blog, which city would you like to explore through food ?

I’d like to explore Los Angeles because right now a lot of people from New York move to LA since it offers a better quality of life. Furthermore, California has some amazing farmers and prime produce and ingredients, a stark contrast to the difficulties Berlin and its surrounding agriculture faces.

You’ve been posting a lot about your culinary discoveries and travels on Instagram,  can you describe your page in three words ?

Semi-personal , indulgent, and green. I don’t document my life, it’s just glimpses into the photogenic parts of it.

You’ve got almost 37k followers on Instagram, how do you feel about this social media ?

I like Instagram as a channel for my blog and a distribution channel for the content I make for Stil In Berlin, it’s definitely the most important social media for food. I also like it as a consumer because there are a lot of niche-accounts doing great stuff. Currently, the algorithm organizing the feed seriously sucks, it’s quite redundant and mostly rather out-dated.

What a day! Thanks for all the sun, the shine, the ice, and the cream. This @rocket_and_basil x @paletasberlin melon with cardamom and basil is actually the only ice cream I had today but I didn’t mind because it was such a joy to see you feast! Should we do it all again? #itsanicecreamparty

First, you need an idea of what you want to communicate. Then, one of the crucial things is to be patient and stick with it. Sometimes people think it’s social media, so everything needs to be viral and grow from ten to a thousand followers in a week. However, most of it requires loads of work, especially on the quality of your content. Even more than, say, two years ago when there wasn’t an algorithm, and people who followed you would just see your pictures. Now, the new system kind of demands you to be engaged all the time, otherwise it punished you by hiding your content from your audience.

Have you got any plans for the years to come ?

End of August, I’m throwing a huge street food event by the banks of Spree together with Bite Club. We’re assembling the best of the Berlin street food scene and will make them do only vegan and vegetarian dishes, which are strictly without meat, but focus entirely on indulgence instead of health.

Brammibal’s Donuts – a vegan donut place that is certainly not healthy.

Time to plan your weekend brunch – this vegan one is now on #stilinberlin.de

Kumpel & Keule is a butchery inside of Markhalle Neun, that does a great job acting as actual advocates for sustainable meat production – they only sell organic meat, for which the animals have been raised in a considerate way, and are very transparent about their sourcing.

If you’re really hungover, try Geist im Glas – their hearty brunch dishes come with a lot of cocktails to mellow your hangover.

Definitely Ora at Oranienplatz, a former pharmacy with a gorgeous interior and delicious cakes.

Karloff – a tiny Italian restaurant in Kreuzberg where they do simple, but really delicious Italian food.