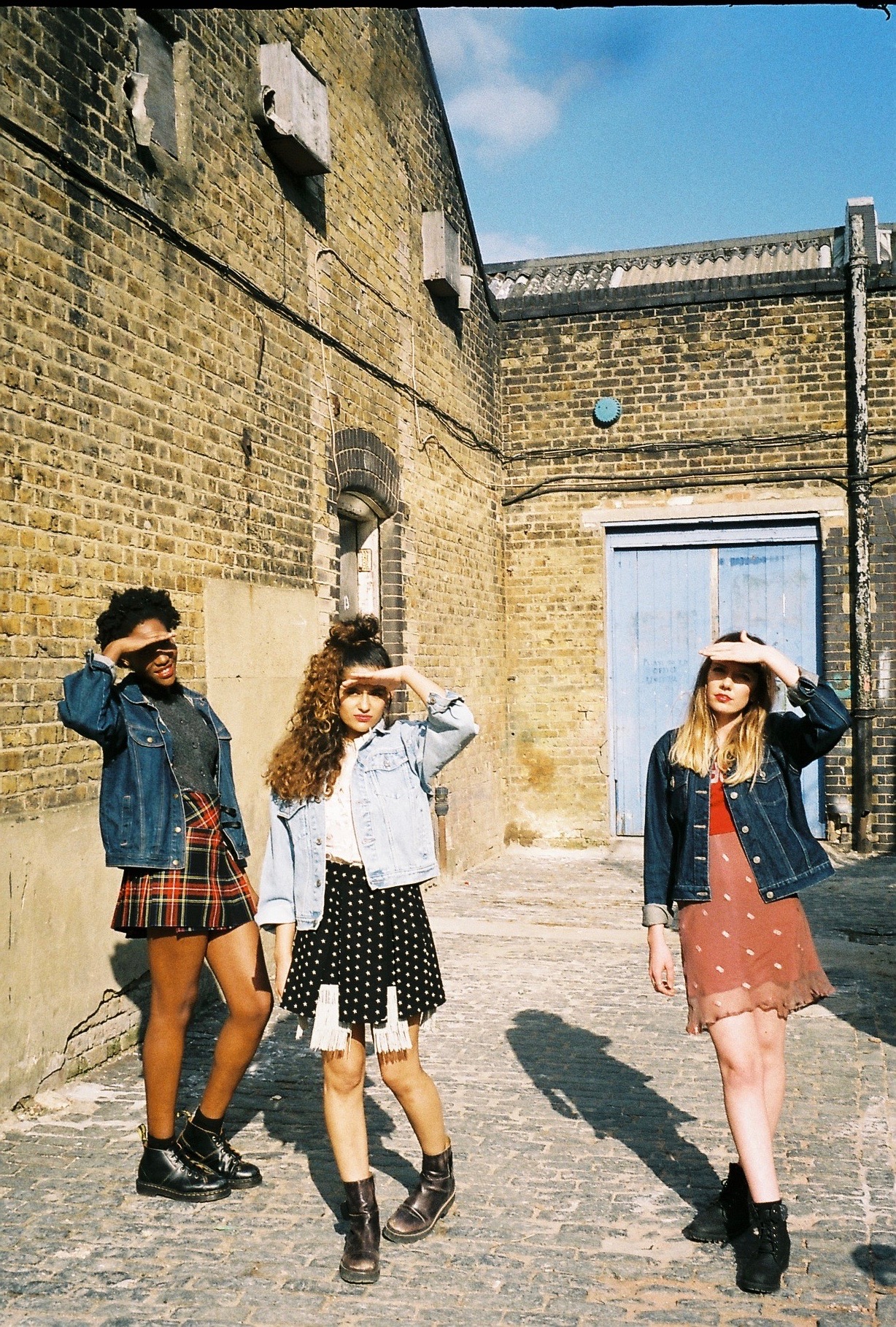 What’s it like being an all girl band in a male dominated industry?

Nadia: The negatives are that you’re treated as a token band, have to prove yourself harder, work 10 times harder. The positives are that you can try and make change for the current situation and for the future generation of girls. That’s if the world hasn’t ended by then.

Beverley: Yeah, there’s this look in people’s eyes when they see an all girl band walk on stage. People are always surprised how good we are after we’ve played. It’s really annoying. As much as I wouldn’t change who I am it’s a burden being a woman and it’s a burden being black. The best thing to do is not let these things hold you back because you are amazing, you are beautiful and people need to see you.

Harriet: To be honest we are so used to it now. But there needs to be more opportunities for girl bands especially with women of colour in them. They need to be championed. We have to work twice as hard, but luckily we are workaholics.

In reference to the song Tut Tut Tut, do you think that female bands to get swept behind less popular and talented male acts?

Nadia: Yeah, men don’t have to put as much effort into it as we do, they have the rolled out of bed look. They can just stand there with guitars and have the breathy raspy vocals and it’s like OMG HE’S SO AUTHENTIC. Next thing they’re on major radio and I’m still trying to figure out what their secret recipe is. But there isn’t one. The thing is when one artist gets big then major labels want replicas of this person because they know this type of aesthetic does well. So now I’m noticing loads and loads of male solo acts with similar vocals. BORING.

Harriet: Yes, I agree with Nadia. Cis white men can get away with the bare minimum and get put into this authentic “real music” category. They’re also are far less likely to be scrutinised on attitude or physical appearance. As a woman you can be slut shamed for something minor like wearing a short skirt and accused of being a bad role model. You could ask for a bottle of water and suddenly you’re a diva. Rumours are spread about women SO easily and it can be difficult to counteract them once they are out there.

Beverley: That’s so true, no one has an individual sound anymore. Everyone sounds the same, it’s rubbish. Some guy from the industry told us a lot of songs are going over people’s heads. I thought to myself of course they are because they all sound the bloody same. People write a song the way they write a tweet: short, quick, fast and then it’s gone. No meaning and no substance.

What does feminism mean to you?

Harriet: Everything. I am overwhelmed and empowered by the talented women around me. But it’s important that feminism continues to thrive for representation of all women or those who don’t identify as cis male. Intersectional feminism is crucial. I think people are learning that now, I hope.

Beverley: It means equality innit. Don’t judge me for what’s in between my legs. What steps does the world need to take to update its brain?

Harriet: Be open minded. Just because someone’s identity doesn’t fit your conceived notions or understanding doesn’t mean it’s wrong or weird. The gender binary is fucked up, identity is so much more complicated and beautiful than that. Update your friendship group and the people you spend time with. If you hang around with just white or middle class people then don’t get stuck in that bubble. Be aware of your levels of privilege. Stick up for those with less privilege without talking over them or taking up their space.

Nadia: Listen to our album ‘Update Your Brain’ all the answers are in there.

Beverley: Be open minded have an open heart.

Do you think there needs to be more politically charged acts as opposed to pop acts?

Nadia: More popstars are getting political but not enough. Lily Allen is well good on Twitter, she just outs right wingers all the time and gives zero fucks. MIA is so political that she literally gets boycotted from stuff. So yeah, more political acts in the mainstream would be good but it might hinder your success as mainstream media is run by the right wing. Beyoncé got famous first and then got more and more political once she was famous.

Beverley: There are loads of political acts out there, it’s just they never get the limelight they deserve. I was listening to Ms Dynamite and she was so political in her songs but because the songs were so catchy no ever noticed.

Harriet: I think pop and politics can work hand in hand and this needs to be taken advantage of more. I like that a lot of female pop acts will have feminist themes to their songs.

Who would be your dream celebrity all female lineup?

Beverley: Solange, The Internet and Tinashe.

What gives you girl power?

Harriet: The women around me creating great music and doing cool creative stuff.

Nadia: Believing in ourselves and never giving up.

Beverley: When you’re with your best friends and you’re uncontrollably laughing.

Which creative ladies are kicking it right now?

Beverley: Yeah MIA is doing this really cool think where she’s not making any merch for her tour, and she’s told her fans to make their own merchandise. I think that’s pretty sick, but for me it has to be Solange she has this song called ‘Don’t Touch My Hair’ and it speaks to me.

Harriet: My sister Jennifer Doveton has an amazing solo project called Baby Arms, Christine and the Queens is really cool, interesting and doing very well, Chrissy and Nyla from Joyce Delaney are just wow. I think more people need to know about the talent that is Faith Taylor, she has a solo project and is also in a band called Suggested Friends. I really like the singer/guitarist from Japanese Breakfast. Love her guitar parts and totally fancy her. Kathryn from the band Fresh. Estella of Junk. Katie Gatt and El Morgan from Personal Best. Nicola from Doe. Phoebe from Happy Accidents. Could go on forever.

How can girls get together and start their own bands?

Nadia: Just do it. Don’t overthink it. Don’t let men put you off. See it as serving a duty to make change for ourselves and the future.

Harriet: Just have fun with it. Write every lyric down and don’t be scared to show each other new songs!

Beverley: Don’t wait around thinking about it, do it.

Who or what is currently making you “tut”?

Harriet: Well the obvious answer is Donald Trump. But he also represents a larger issue at hand. We need to create a world where Donald Trump doesn’t need to exist as the only option of “change”. He represents how bad things have gotten and America has found itself in a living nightmare.

Nadia: People who claim to be left wing, sing political songs and portray a public persona of caring but behind closed doors treat people badly, don’t pay the people that do jobs for them, book bands who have rapists for lead singers and basically say one things but do another. But are being praised for being politically correct and seen as a role model. I could out people in the music industry all day long.

Beverley: Yes, lots of shady people, but you need to remain a good person and exit these people out of your life. Brexit has made me tut and Trump winning the US election, but we need to not let these things harden us.