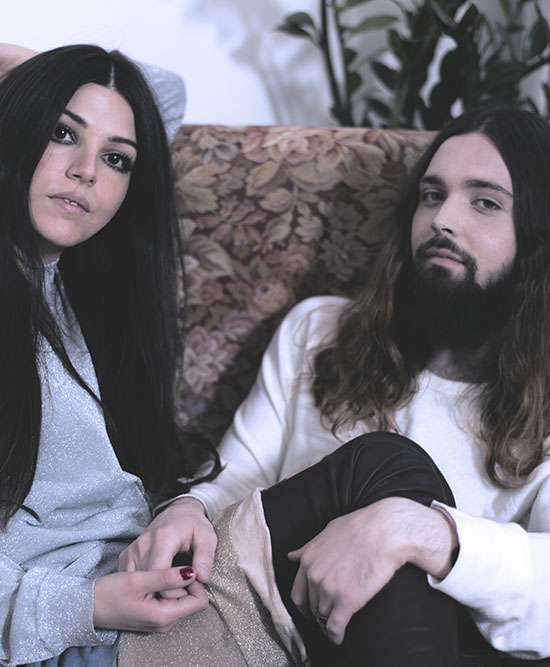 Which film-story would fit perfectly for your music?
For this current song, Alice In Wonderland comes immediately to mind. But our music covers a wide range of feelings: love, fear, passion, excitement, anxiety, and the perfect film-story would do the same. In terms of this new mini LP as a whole: the film would probably be on the darker side… but it would contain rays of hope.

You met on Soundcloud but you were located at the other end of the world. How did you even come up with the idea of starting a relationship and a band?
Well, we were first drawn to each other’s music – so our initial thought was that we should collaborate on something. And we figured this would be possible since in the “internet age,” it’s not all that difficult to collaborate over long distances; you can simply send files back and forth. The funny thing is though, the more we got to talking over a period of weeks – the more the conversations turned personal and the less they were centered around music. It ended up being that we didn’t collaborate on anything musically until we first met each other in person – over five months after we had first started talking!

Would you say you are the embodiment of a modern relationship?
The cool thing about modern relationships is that NOTHING really embodies them. There are so many configurations possible in today’s world that it is actually the lack of a “standard type of relationship” that is the hallmark of modern relationships. But still, our meeting and its unique particulars could only have happened in world with music streaming sites, video chat and high speed Internet… so in that sense, yes! We have a uniquely modern relationship.

Why Stockholm?
We go where the wind blows. And also: Stockholm is beautiful and has a vibe that says to us: “here is home… for now.”

Where do you get your inspiration from?
Shpresa It can be different things… but for me it usually comes down to a feeling that builds and builds and finally needs to be expressed. Other times it can be something as simple as reading a line in a poem or in a book or hearing a spoken phrase and that will inspire this whole web of musical ideas.
Cole I usually try to put myself in a certain “space.” I try to find a feeling that leads to a thought and a thought that leads to a statement. The statement then becomes melodic and lyrical.

What is your favourite moment within the working process?
Shpresa Sometimes my favorite moment comes when we’ve been working really hard and struggling with a song and then all the pieces finally come together. Other times my favorite moments are those in which a song just seems to flow out of me, or us, in one whole piece; as if it had written itself.
Cole My favorite moment is when all the parts we’ve contributed to a song suddenly become one thing that is greater than the sum of its parts. A bunch of lifeless pieces suddenly becoming a living thing; an entity.

The first song of the Mini-Lp is called “For Someone”. Did you have someone in mind?
Each other… the actual us and a fictional us.

The song is about love, but not a fulfilling kind of love. What is the message of your song?
To be honest, it means something different to us depending on what we’re doing or what we’re thinking about when we hear it. We still haven’t completely figured out what it’s trying to say but more than any other song we’ve written: it speaks to us directly and consistently.

Why did you choose the Swinside stone circle in Northern England for your video?
Swinside is an ancient place with a deep and mysterious folklore attached to it. It was a perfect setting for the feeling we were trying to convey with this video.