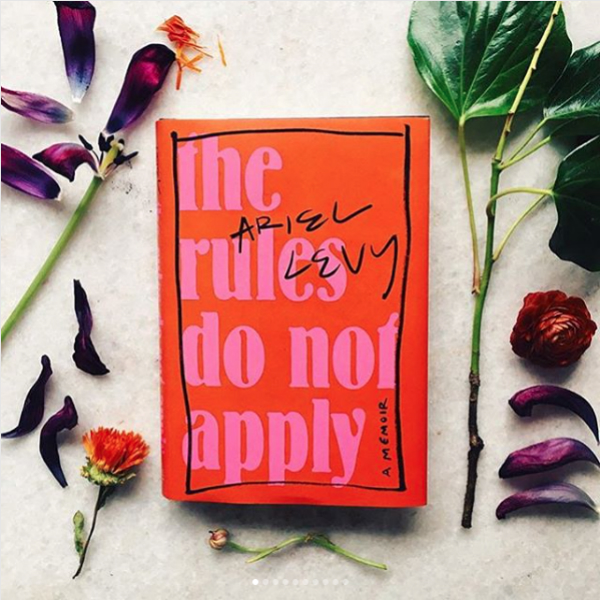 THE ESSENTIAL BOOKS TO READ THIS WINTER

When it turns cold outside there is nothing better than sitting in a cozy chair or on the sofa, a cup of tea next to you while reading a book. A number of striking and forward thinking female authors not only have found a very unique language to describe the many struggles of today’s society, they moreover create plots that catch the reader already with the first words. With their as much emotional as rational way of writing they raise their voice for womanhood, and show what is it like to be a human individual in our day and age in general. As various as these genres might be, the common and radical is their way of thinking. Here are four of the must-read authors this winter:

Ariel Levy: “The Rules Do Not Apply”

In her very personal memoir, Ariel Levy not only shares the loss of her unborn baby, she further describes very drastically what it means when a life implodes from one second to another. Starting with her childhood, we get to know Ariel Levy as a strong and independent woman, who has never allowed herself to simply accept alleged limitations but to fight for her dreams. The plot finds its climax when the happily married and five months pregnant 38 year-old staff writer at The New Yorker travels to Mongolia for an interview. After leaving dinner with heavy abdominalgia she gives birth to a little boy in her hotel room. The baby dies only a little later in her hands. Totally shocked and devastated by this great loss, her complete life suddenly cracks.

The woman who always thought of being able to face anything in her life finds herself confronted with something she cannot control – something she simply names as nature. At once nothing seems to be the same anymore. Even the marriage to her beloved wife turns out to be a burden, when Levy finally discovers her drinking problems. “The Rules Do Not Apply” is a striking portrait of modern womanhood focussing on the question of what happens when what we have always prepared for never turns into reality. What are we to do when all our dreams pop like a bubble or, even worse, turn into a nightmare? How are we to react? How are we to get on? How are we to overcome? Ariel Levy, as well-known for her great essays and interviews as for her feministic and empowering texts, demonstrates how to deal with this dilemma and moreover with the phenomenon of luck in general. By allowing us a little, but intense glimpse into her personal path, she wrote an intimate portrait of a strong, independent, and somehow unbreakable woman.

“The Baby is dead. It only took a few seconds.” These are the first two sentences of Leïla Slimani’s great literary debut. What follows is a very close look on today’s society, the difficulties of bringing together family and business and most of all the psychogram of a nanny’s emotional abysses, blinding out her own seemingly insufficient life to replace it with the one of the family she is working for. Inspired by a real incident, which happened in New York City in 2012, and awarded with the Prix Goncourt, the most important french literature award, Leïla Slimani immediately became one of the must-read-authors for this season.

Precisely and fearlessly phrasing the evil she finds a language that not only fits her characters but also displays them as first and foremost authentic. While reading, there is a vague, uncomfortable feeling, which keeps you on your toes for the big collapse. Page by page, we enter the mind of a more or less dark and confused soul. The more we get to know the nanny and her thoughts, the more we get the idea that the final murder of the two kids might be less a simple act of violence, but more the logical consequence of a society forcing people to deny themselves as individuals in order to survive  financially. The Moroccan-born Leïla Slimani, who moved to Paris at the age of 18, knows what it’s like to live at the edge of society. She tends to call this phenomenon an act of modern slavery and her novel gives the best explanation why.

Leila Slimani – The Perfect Nanny will be available from January 9th, 2018

Two girls, growing up in the projects in the south of London. Both – as different as they appear in their characters – connected through their bond of friendship and one big common dream: They want to become ballet dancers. Several years later, none of them achieved what they were once wishing for. Since the nameless storyteller has entered the glamorous world of the rich and famous by being the assistant of a well-known pop star, her best friend Tracey never made it out of the deprived area. The friendship does no longer exist. And over all, the storyteller has to ask herself what price she had to pay for fulfilling her wish to leave her origins behind.

With her fifth novel “Swing Time”, Zadie Smith again deals with the big questions of origin and identity, deliberating in what ways our social background takes part in our personal development and who we are transformed into. She once more creates an insightful portrait of today’s society. Is there really a way out of social inequity and can we achieve our dreams with hard work and persistence? Or do we at some point see ourselves confronted with limits, which we in the end cannot influence? “Swing Time” is about all this and still more about the differences and similarities between different skin colours – especially black and white. Both girls are neither completely black nor white, defining themselves as brown they do not feel like belonging anywhere from the very beginning. Something everyone might know very well, and a motivation as much as it can be the breakdown of your dreams.

Margaret Atwood is one of the most important female writers of our times, with her texts translated into numerous languages all over the world. During the last Frankfurt book fair this October, the Canadian author was honored with the Peace Prize of the German Book Trade. This came as no surprise, since her stories appear to be more topical than ever, especially one of her most famous works “A Handmaid’s Tale”, which has also been adapted as a TV series recently. Set in a dystopian, patriarchy future ruled by a number of christian puritans, who spread fear and panic under the cloak of morality and honesty, women are neither independent nor individual anymore. Not even allowed of reading, they belong to men, carry their names and work either as housewives, kitchen maids, or as bodies – better to say, strolling uteri – who are supposed to give birth to the next generation.

The main character, who we get to know as Offred, a synonym for “of Fred” to whom she belongs, is such a woman. Caught in this repressive system and haunted by her memories of a past where she was a free woman with a career and own choices, married to a loving man and mother of a little daughter, all she is allowed to do now is living in a house of a leading general, trying to fulfil her fate of bringing new life into the world. There is no other choice for her – except death. And even death itself has become a method to represent the strict and moral authority of this system. So what to do, when there seems no hope anymore? With “A Handmaid’s Tale”, Margaret Atwood created a dystopian vision that perfectly fits into the tradition of Aldous Huxley and George Orwell. Maybe we should understand it as a dark foreseeing of what might happen when the wrong people come to power.