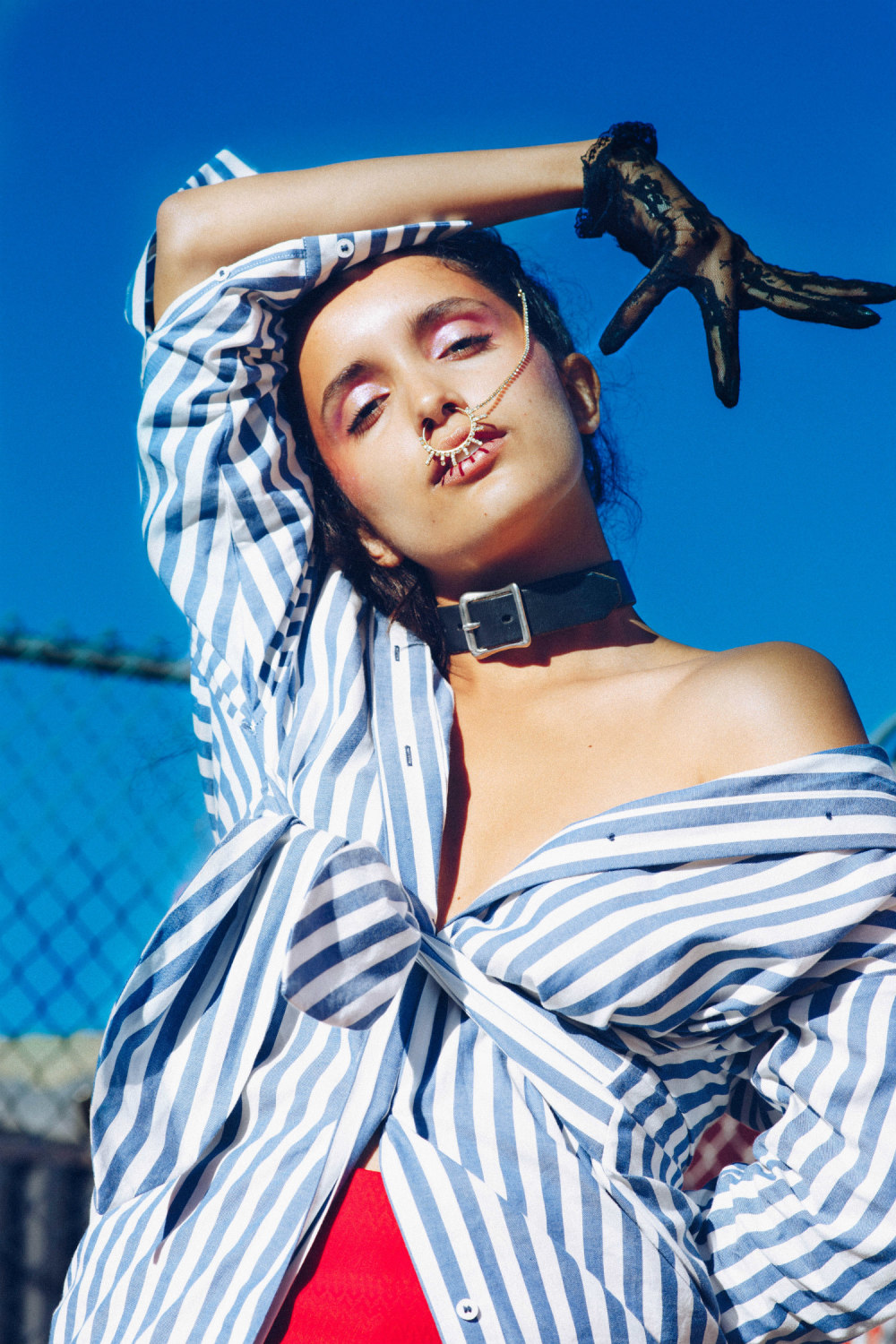 Josephine, you’re singing in Hindi and English – how has your heritage influenced your work?

Growing up within my unique identity has meant and still means constantly balancing two different histories united in one body that is me! However, my experience with this apparent duality doesn’t always feel polar. Most of the time, navigating my identity isn’t that simple. It often calls for manifestations that are so much more complex than the sandwiching together of two opposite forms. Meeting myself at these ambiguous intersections becomes less of a balancing act and more of an exploration through a multidimensional space for which there isn’t yet a map. In a world so dependent on rigid borders, navigating mixedness can be really difficult. I appreciate, enjoy, and learn the most from work that pushes, challenges, breaks, blurs, acknowledges, and repudiates boundaries of all kinds and also encourages multiplicity, nuance, and intersectionality.

How do you translate your personal experiences into your music?

I try to reflect on borders and ambiguity in my own work. My bilingualism is one manifestation of my experience straddling two cultures. However, my Hindi is so much worse than my English. It is mostly self-taught, and I am excited to get better at it!

What is the story with “Azaadi Is Freedom Is Fate”?

I wrote “Azaadi Is Freedom Is Fate” as a reflection on the concept of freedom. From what I have witnessed in history books, in the Bay Area, and amongst my peers, freedom looks different for different groups of people. For some, freedom follows an education, a rehabilitation, a marriage, a divorce, a change in policy, a change in citizenship status, a surgery, and so much more. Some people have never experienced their freedom, and some people are a lot closer to their freedom than others.

The music video very much focuses on hair – did you also want to address the freedom of body hair?

The hair of Brown and Black womxn and femmes is a site of expression that is heavily policed, so we centred the video on POC hair to encourage and celebrate its free expression.

What do you see as the problem regarding the representation of hair of diverse women in media?

Brown and Black aesthetic culture is and has long been really trendy. I have seen a lot of ad campaigns lately featuring Brown and Black models and culture in a way that is seemingly very distinct from the brand’s usual advertising program. Such ad strategies feel really tokenizing.

What makes music the right outlet for your message?

Josephine: Music is one of my favorite ways to emote! Following the story of a song while also hearing the sonic embodiment of that story’s emotions is so magical to me.

You, Jasdeep, and Reva are close friends – what was working together like?

On set, I felt so heard by them, and I felt lucky to create a video that resulted from such a true collaboration. They are really talented and thoughtful artists, and I always learn new things about their vision and talent each time I work with them. I also learned a lot about myself as an artist, a friend, and a collaborative partner, and I am so grateful to have journeyed through that discovery process with two friends who really have my back.

How did you come up with the concept and aesthetic of the video?

Jasdeep: The house that we filmed in definitely inspired the aesthetic of the video. The wood floors, vintage doors, the baby blue porch really influenced even the pace of the music video. Reva decided to style everyone in jewel tones to compliment the colors in the house with Pragya’s assistance. Since we were focusing on POC at-home hair culture, I wanted to make sure that we filmed in a delicate and nostalgic space. I imagined what type of people I wanted to be surrounded by within the house, and eventually this lead to Josephine and I casting a bunch of our friends. There was so much beautiful energy that was created from bringing together so many powerful womxn and femmes. Each and everyone of them, including the womxn and femmes behind the camera, channeled what a safe and empowering environment looked like.

Reva: We were also infuenced by our lived experiences as daughters of the diaspora, Jo’s energy and music and honestly all the dope people that were down to be a part of it. Jasdeep, Pragya, Josephine, and I have worked on multiple projects together so we understand each other and each of us brings really unique perspectives to the table. The aesthetic is really a visual amalgamation of our minds.

How much does your work benefit from collaboration?

Josephine: Collaboration is really important to us, especially in its various forms! I for one am always down to offer support to other artists, and I am really honored and grateful when other artists offer their support to me. When I jam with other musicians or create visual art with other visual artists, I usually find myself co-creating something so beautiful and personal, but at the same time, something that I really could not have made on my own. I learn a lot from the process and from the results of collaboration, and I am grateful for every chance I get to learn. I also love collaborating on events, because shows create a space for even more people to meet and collaborate and explore themselves in.

Now that “Azaadi Is Freedom Is Fate” and your message is out – what are some other topics you’d like to adress with your music in the future?

First of all I hope “Azaadi Is Freedom Is Fate” can encourage those with a lot of freedom to reflect on their position and fight for the freedom of others. I also hope it can provide hope to people whose human rights are being challenged. In the song, I imply that freedom is fateful, and I really do believe that. Then I would like to call out systems of oppression more directly in my future songs.