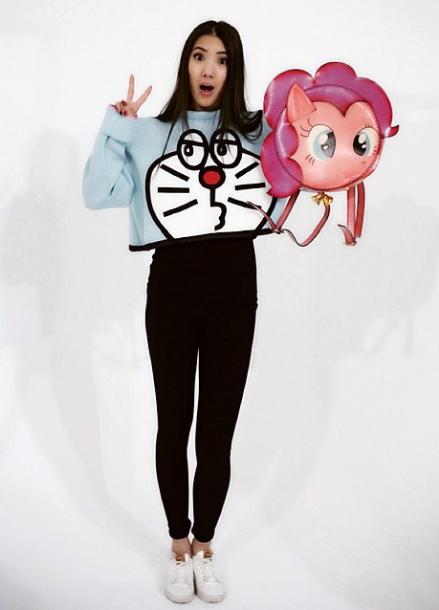 Being a child was wicked. No sorrows. No stress. No life changing decisions. The natural living space was located between the schoolyard, the sandbox and the television watching all those awesome animated cartoons. Everything seemed to be protected by a rose-colored bubble. However we grew up (physically) and the bubble bursted. All that remains are our sticky memories. Memories that inspire many designers in their works.

One of fashion’s Peter Pans is Jeremy Scott. Remember the Fall 2012 Simpsons pieces? Or the Spring 2015 Shrek sweater? Since being Moschino‘s Creative Director he reinvented the Italian luxury brand in his typical design language: trash meets pop culture meets cartoon. In his first season it was Sponge Bob followed by Barbie and now – The Looney Tunes! However there are loads of other creatives who are digging childhood references. For Fall 2015 Fyodor Golan, the London based womenswear duo, presented colorful ‘My Little Pony’ prints, rainbows included of course. Obviously Yang Du, an upcoming Central Saint Martins graduate, had a crush on those big eyed horses, too. She crafted leather bags with loving attention to detail. A real cuteness overload was shown by Spanish newcomer designer Krizia Robustella who chose the Care Bears – you know, those fluffy, cuddly, almost disgustingly happy bears – as the main characters on the catwalk. Well, she wasn’t alone with this idea: Ichiban’s collaboration with Asos had the same sugary theme. One who always prefers the darker side of that easygoing cartoon world is the british menswear designer Bobby Abley. We’ll never forget his scary interpretation of Mickey Mouse for the past Autumn/Winter season! While abstract prints of Ariel, the little mermaid, and her antagonist Ursula decorate his creations for the coming summer, Disney’s Jungle Book characters were the biggest inspiration for his Fall 2015 collection.

We’re living in an adult world that is full of problems. The likes of these designers help us to escape. To find a way back to our rose-colored, peaceful bubble. And even if that bubble is just an illusion – it brings back happy children’s laughter in grown-up faces.